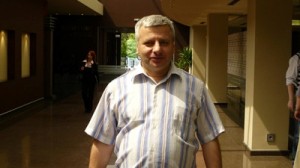 Kiril Georgiev has been banned by BCF, chess players around the world are shocked by the ban for the legend

Last week at a national press conference it became known that BCF is investigated for corruption by the local sports ministry and the country’s chief prosecutor, based on a report by the National Agency for Financial Inspection that cites inflated financial spendings, organization of false or nonexistent tournaments, unreasonable travel expenses, and mind-boggling amounts spent for security and ceremonies at events.

The information was presented by GM Kiril Georgiev, Metodi Stoinev and Simeon Stoichkov. Such mass media display of information turned out not be of the likes of the Bulgarian Chess Federation. With swift action and few details the federation banned GM Georgiev, Sotoinev and Stoichkov for “undermining the prestige” of the organization.

The press release, signed by the ex press officer of ECU during Danailov’s presidency and current member of the BCF board – Boiko Hristov, states the following:

Yesterday, 05.05.2015, at a meeting, the board of the Bulgarian Chess Federation decided:

1. In connection with the public deliberate, targeted, and coordinated actions and the statements made by Metodi Stoinev, Kiril Georgiev, and Simeon Stoichkov, aiming to undermine the prestige of the Bulgarian Chess Federation, sabotage of its activity and discrediting of its leaders via revealing publically untrue, unproven, and defamatory statements for corruption and misuse (at the press conference on 28.05.2015, social media, etc) as well as defamation of the Minister of Sport of Bulgaria and the Ministry of Sport, the board members BCF decided: to designate their actions as […] violation of the ethics code of the federation.
As a result, from 05.06.2015, the board of BCF deprives of playing, arbitering, organizing, club managing, and coaching rights under the BCF system: Metodi Sotinev for 3 years, Kiril Georgiev for 3 years, and Simeon Stoichkov for 5 years.

2. The board of BCF supports the actions of its President and its Executive director (e.d. Silvio Danailov and Nikolai Velchev)

3. The board of BCF unanimously decided to back the nomination of Silvio Danailov for President of the World Chess Federation (FIDE) at the upcoming 2018 elections.

This is not the first time the Bulgarian Chess Federation is against their activities being revealed to the pubic. At the presidential elections in Bankia last December, journalists were not admitted to some of the most important debates and the voting. In addition, at this moment the Bulgarian Team Championships are going on, but a good number of websites including Chessdom.com are forbidden with lawyer’s warning to cover the event.

The story of BCF taking actions against people publicly stating opinions dates from much earlier. Simeon Stoichkov, one of the implicated in the national press conference that revealed the report of the National Agency for Financial Inspection, has actually been banned before for having a chess forum! We cannot emphasize how ridiculous that sounds in a democratic and free society in the internet era. However, exactly this ban leads to a bigger ban for him now, as it is considered a recurring action. Therefore, Stoichkov will get banned for two extra years.

While the chess media are used to such actions by Danailov’s lawyers in the ex ECU or the current BCF, the chess players are in shock. Facebook accounts are flooded with messages of support for Kiril Georgiev and his colleagues. The first strong reaction came from ACP and Emil Sutovsky. In his facebook profile he commented,

“Bulgarian Chess Federation disqualifies the reigning champion of the country, the legend of Bulgarian chess Kiril Georgiev for three years! He is accused with the slander and violation of ethics code, following GM Georgiev’s public accusations towards the President of BCF Silvio Danailov. Now, I don’t think there is a need to talk about Mr. Danailov – his own twitter speaks volumes about this person. But what ACP could and should do in order to help its Premium Member Kiril Georgiev? First of all, we are not in the position to change or really challenge the decision of BCF, but we will address FIDE, asking to check the legitimacy of such a decision. Second, we’ll ask the organizers of international events to pay attention to the fact, that GM Georgiev is denied a possibility to play (and teach) in his own country, and we hope that the legend of Bulgarian chess will get more good invitations abroad. Finally, I’d like to emphasize again : the professional chess world has to be strong and united – thus the politicians of all kinds won’t be able to ruin a career or indeed the fate of the people who dedicated their entire life to chess.
ACP – with the chess professionals, for the chess professionals.”

Stay tuned for more details with Chessdom as the story unfolds.