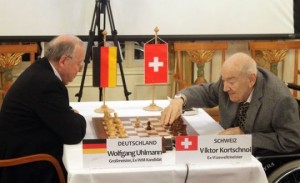 Korchnoi playing against Uhlmann in 2015

The chess world lost a player, the legend will remain forever. Viktor Korchnoi has passed away in the hospital in Switzerland.

Viktor Korchnoi has a myriad of titles with the Soviet Union. Korchnoi is a four-time USSR chess champion, a five-time member of Soviet teams that won the European championship, and a six-time member of Soviet teams that won the Chess Olympiad. Korchnoi defected to the Netherlands in 1976 and later moved to Switzerland where he stayed and played until his final day. As a Swiss citizen he played his two World Championship finals with Karpov in 1978 and 1981. From that matches Korchnoi holds the record for the longest World Championship game.

Korchnoi was the oldest active chess Grandmaster for many years and won the Swiss national championships in 2009 and 2011 at age 78 and 80 respectively.

RIP Viktor Korchnoi, thank you for all the great chess!