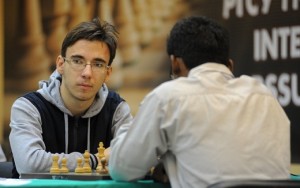 Russian IM Urii Eliseev recovered from yesterday’s loss against Vladimir Belous and defeated GM Sethuraman with the white pieces. He is now half a point behind Belous in the standings and still has the chance to fight for the winner’s trophy with three rounds to go.

The game started with a sharp Sicilian. White gave up a piece for a pawn and the possibility of keeping the opponent’s king in the center. The Indian made a big mistake when he decided to defend his extra piece with a knight instead of a bishop and the game went uphill from there.

Eliseev used his initiative wisely and finished the game off by chasing the Black king with his queen and rook. Sethuraman resigned on move 31 when checkmate in 5 presented itself on the board.

IM Vladimir Belous maintained the lead in the Young Grandmasters Tournament with 4,5/6. Shimanov and Eliseev are half a point behind.