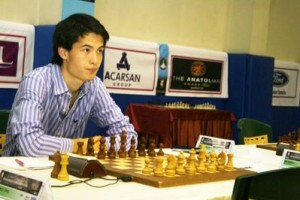 The 100th British Championships will take place from Sunday 28 July to Saturday 10 August 2013 at the Riviera International Centre, Torquay, England.

The event is expected to attract a record-breaking number of entrants of well over 1000. The current record is 1010 in Edinburgh in 2003.

Players from England, Guernsey, Ireland, Jersey, Scotland and Wales are entitled to compete in the 32 Championships which include British, Seniors to Under 8 and even a Pairs Championship. In addition there are tournaments open to anybody from anywhere.

The recent winner of the Scottish Championship Gawain Jones is the first seed so far. David Howell, who is participating in Leiden, is the second seed. Mark Hebden, Jonathan Hawkins, Daniel Gormally and Peter Wells follow close behind.

The event starts at 10am on Sunday 28 July with a THINK DRINK Bullet Chess (all the moves in one minute) Challenge Match between GM Keith Arkell and IM Gary Lane.

It is hoped that the games will be broadcast live on the website, but there may be problems. The match will last one hour and will create a new World Record for the number of games in one hour.