Spain, United Kingdom and Germany moved into shared lead with 6 match points after the third round.

Russia, who eked out a last gasp victory over Serbia in the previous round, found the going equally tough today. Russia only managed three draws in the last three boards against Spain, even as International Master Meshkov Yuri went down in the first board against FM Desanjose Candalija of Spain. The lone win helped Spain move past Russia 2.1 -1.5 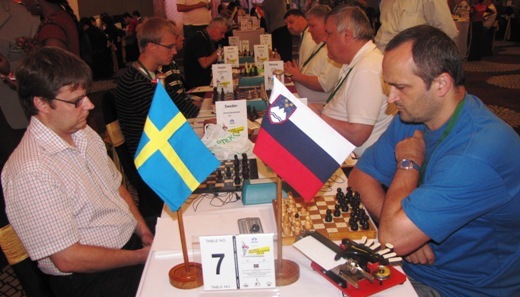 International Master Colin Crouch, helped United Kingdom move into the top of table scoring a quick victory in the first board, giving UK a flying start against Poland. UK went on to win the match against Poland with 2.5 – 1.5 score.

Germany playing in the third table, upset higher seeded Ukraine 3-1 scoring in the bottom two boards, and splitting the points in the first and second boards.

India “A” beat Bulgaria 2.5 – 1.5, as Swapnil Shah and Kishan Gangolli scored crucial wins in the middle boards over Todorov Aleksandar and Patev Petvo respectively. Bulgarians restored parity when International Master Nizam Rasim (ELO 2232) defeated Krishna Udupa in the top board. With a 2-1 lead, and needing a draw to settle the issue, Gujarat lad Darpan Inani faced an uphill task in the fourth board. A two pawn deficit against Kichukov Milko appeared to be too big an ask when the Bulgarian succumbed to Darpan’s pressure tactics, missed a win and settled for a draw in the fifth hour of play. 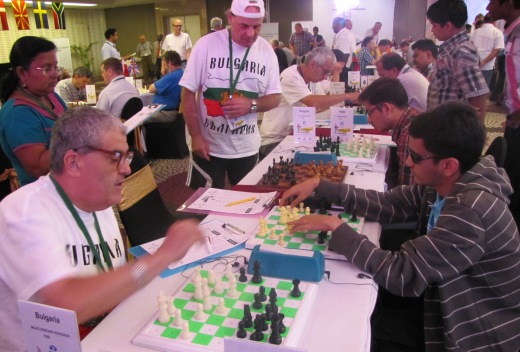 India A - Bulgaria, Kichukov - Darpan on the top board

LIVE games of the TATA 14th IBCA World Chess Olympiad for Blind 2012 can be viewed at http://www.monroi.com/watch/?tnm_id=1632 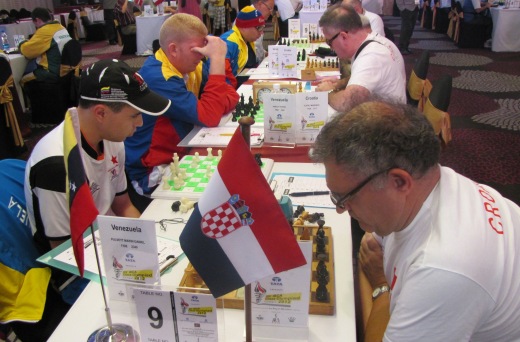