World Champions Viswanathan Anand and Ruslan Ponomariov, Olympic cup holder Levon Aronian, and best-rated Spanish player Paco Vallejo are the stars of the 7th Grand Slam Masters Final in Bilbao, which will be held this year at the Euskalduna Conference Centre from 14 to 20 September, the organizers announced today at the capital of Biscay.

The Masters Final is one of the most prestigious tournaments in the world, and the only one in history to have reached category 22 twice, the highest level in this sport, which has never been reached in any other international competition.

At the launch event, Andoni Madariaga, general director of the Final, and Leontxo Garcia, commentator and spokesman of the organization, declared that for the player selection “we took into consideration the quality and attractive of their play, which guarantee a very high-level tournament, as well as their complementarity with the spectacular list of GMs who will play in parallel the European Club Cup.”

These simultaneous events will share dates and venue, and they will gather in the capital of Biscay most of the top 50 world chess players. This will turn Bilbao into the world epicenter of this millennial sport. 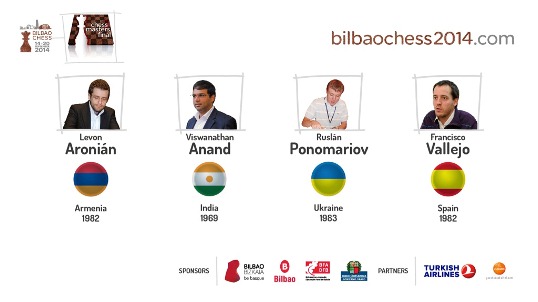 The four finalists have obtained magnificent results throughout the year. The leaders are Olympic cup holder Levon Aronian, who won the Masters Final last year (as well as in 2009), and five-times World Champion Viswanathan Anand, who lost the title to Magnus Carlsen in 2013 and will fight him for it again in November, after winning the Candidates Tournament this March.

Alongside them are the best Spanish player in the last decade, Francisco Vallejo from Mallorca, who has relaunched his career in 2014 after a crisis in the past two years, and Ruslan Ponomariov from Ukraine, who in 2002, at the age of 18, became the youngest World Champion in history by defeating his countryman Vassily Ivanchuk.

The organizing committee of the 7th Masters Final revealed that they have tried until the last moment to have new World Champion Magnus Carlsen in the lineup. Had his participation been confirmed, Bilbao would have hosted the informal world rematch between Carlsen and Anand, as well as their last confrontation before the World Championship in November.

However, the Norwegian grandmaster, twice champion of the Bilbao Masters Final (2011 and 2012), has finally declined the invitation in order to concentrate on preparing to defend his world title against Anand.

This year’s edition of the Grand Slam Final will take place in its fixed venue in Bilbao. It will be a double-round robin and it will follow the revolutionary rules that distinguish the Bilbao tournament from the rest and are aimed towards guaranteeing spectacular play in every game. Thus, the Sofia rules will be applied once more, giving the arbiter exclusive rights to determine whether a game is a draw, avoiding agreements between players.

Additionally, the points system applied will be again one similar to that of soccer, with three points for a victory, one for a draw, and zero for a defeat. This system was first used at an elite tournament at the Bilbao Masters Final 2008 and is already known as the Bilbao rules.

Leaving behind the organizational and logistical difficulties of celebrating the Masters Final and the European Club Cup simultaneously this year (which will be attended during eight days by about one thousand international visitors between players, companions, and tourists), in 2015 the Final will restore the usual format of previous editions, in which Bilbao hosted the tournament jointly with world metropolis such as Shanghai or Sao Paulo.