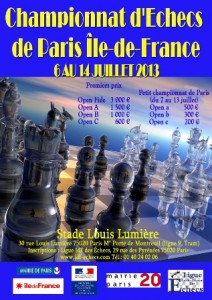 The FIDE Open is available for players with an Elo rating over 2200. The first prize in this event amounts to 3.000 Euros. It is a 9 rounds Swiss open with a time control of 90 minutes for the first 40 moves, plus 30 minutes to finish the game and 30 seconds increments from move 1.

45 players have signed up to participate, including 10 GMs and 12 IMs. French GM Jean-Pierre Le Roux is the first seed, followed by Azerbaijani Namig Guliyev and French Maxime Lagarde.

The Hort system will be used to divide the prizes.