The second round of the Sparkassen Chess Meeting in Dortmund saw four out of five games starting with 1.e4 e5. Wang Hao and Michael Adams both won their games with white in rather long struggles. After two rounds, four players are sharing first place with 1.5/2. The elite German event is just beginning.

The players chose slow fighting lines today. The Russians went for the Berlin Defense: Vladimir Kramnik held yet another draw with his beloved defensive weapon while his colleague Dmitry Andreikin suffered a loss against experienced GM Michael Adams. Daniel Fridman loss with the Petrov against Wang Hao.

German GM Daniel Fridman has used the Petrov effectively for a long time. This Defense has a reputation of extreme solidity and was the chosen weapon of players such as Boris Gelfand and Vladimir Kramnik for a long time. Today, Wang Hao was able to break the Russian wall in 48 moves thanks to his active accurate play.

The setup with opposite side castling was chosen by white. Even though this spoils the queenside pawn structure, it allows for a kingside attack. Wang Hao advanced his pawns fearlessly and started to handle his initiative carefully. By move 35, black had the pair of bishops, but they were highly uncomfortable sitting on c1 and d1. White’s queen was already close to the opposite king and things seemed pretty unclear. Fridman started to falter under pressure and the Chinese showed his class to get the full point after yesterday’s loss. 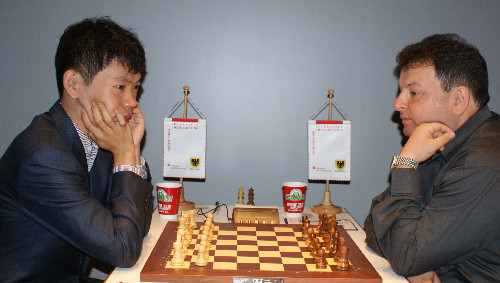 Dmitry Andreikin got an invitation to this event very deservedly. He is the current Russian champion and has proved his strength in events like the Tal Memorial. However, he started with the wrong foot in Germany; today was his second loss in a row. Michael Adams demonstrated how patient he can be when he has a small edge in seemingly lifeless positions.

The game started with a Berlin Wall put up by the Russian. The players went into the usual path, exchanging queens, giving black the pair of bishops and creating a long strategical battle. Everything seemed to be heading for a draw when bishops of opposite colors appeared on the board. Adams evaluated the position as slightly better for him and started to maneuver in order to get a win with his kingside pawn majority. The plan worked as Andreikin had to offer his hand in resignation after 64 moves. 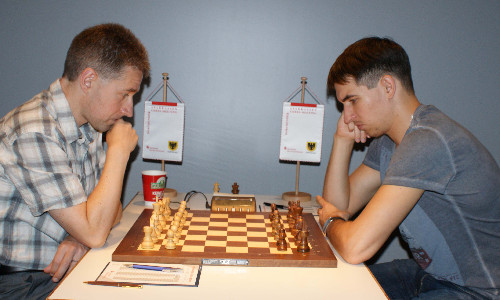 The Berlin Wall that made Vladimir Kramnik world champion worked as a charm for the Russian. Arkadij Naiditsch avoided a heavy theoretical battle and decided that a draw was enough against such a strong opponent. The players signed the score-sheets after 38 moves.

Peter Leko and Fabiano Caruana discussed the very fashionable lines of the Spanish with d3. Caruana found a way to force a threefold repetition and get a solid draw with the black pieces. Locals Igor Khenkin and Georg Meier played a Queen’s Gambit Declined that finished peacefully after 45 moves. 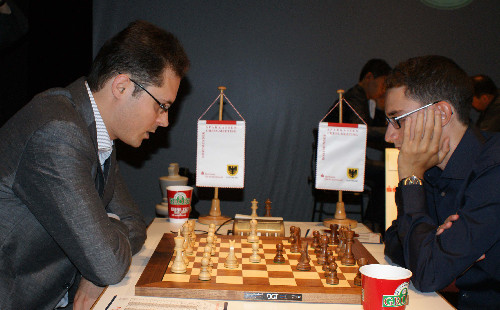