Indian GM Surya Shekhar Ganguly (playing black) and Chinese IM Lin Chen drew with each other in the 6th round to maintain their co-leadership with 5 points each in the  Asian Continental Chess Championships 2015 at the Hilton Hotel****, in Al Ain, UAE. 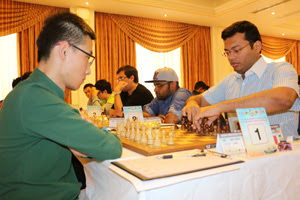 With three rounds remaining, six players are a half point behind the leaders. Tied at 4.5 points each are top seed Le Quang Liem of Vietnam, local hero GM Salem A.R. Saleh of the UAE, Chinese GM Zhou Jianchao and three Indian grandmasters, namely S.P. Sethuraman, Vidit Santosh Gujrathi and Abhijeet Gupta. Chances for the top 5 qualification slots in next month`s World Cup are still good for 11 players bunched together at 4 points each for a share of 9th slot. 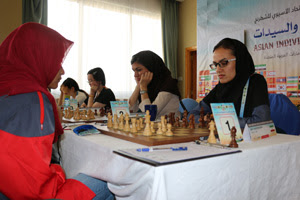 In the women`s division, WGM Vijayalakshmi Subbaraman and WIM Mitra Hejazipour of Iran beat their respective opponents to share the lead at 5 points each. Vijayalakshmi (below) used the Queen`s Gambit to crush WGM Tan Zhongyi of China in 36 moves. Hejazipour (at right with Black) essayed the Sicilian Defense to turn back solo leader WGM Medina Warda Aulia of Indonesia in 39 moves. 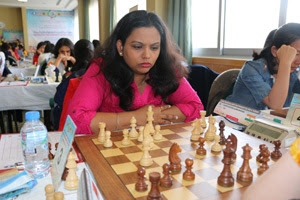 Six players follow a half point behind. Tied at 4.5 points each are Aulia, WGM Mary Ann Gomes of India, WGM Lei Tingjie and IM Shen Yang of China, WGM Atousa Pourkashiyan of Iran and WGM Dinara Saduakassova of Kazakhstan.

Co-leaders Vijayalakshmi and Hejazipour face each other in the 7th round of the women`s. In the men`s, Ganguly has to hurdle top seed Le Quang Liem while Lin faces Abhijeet Gupta in the 7th round. 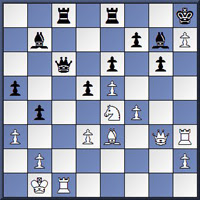 An interesting game of the round was between young FM Semetei Tologontegin  of Kyrgyzstan playing black against GM Ziaur Rahman of Bangladesh.

The event is broadcast with the latest technology. Live running commentary by GM Tahir Vakhidov and WGM Zhang Jilin is available on Youtube.