The Zurich Chess Challenge 2014, the strongest tournament in history with average elo 2801, started with a blitz event on Wednesday 29th January at Hotel Savoy in Zurich, Switzerland.

Magnus Carlsen and Levon Aronian shared the first place with 3,0/5 points each in the event that determined the starting numbers in the main tournament.

In the classical tournament Magnus Carlsen had the best score of 8 points (3 wins, 2 draws). 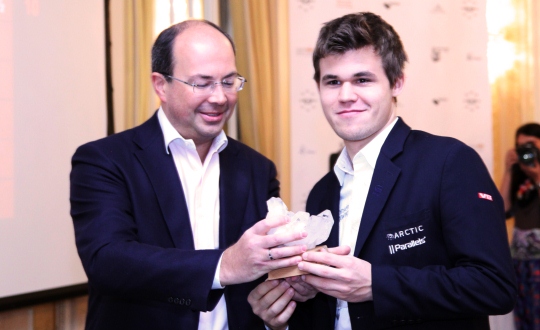 His overall victory seemed imminent, but a poor display in the rapid games on the last day of the Zurich Chess Challenge nearly ruined everything.

Fabiano Caruana’s inspired performance brought him 4,0/5 points for a total score of 9 points, but Carlsen still managed to make 2,0/5 and keep a full point distance ahead of the rest of the field.

Ended a volatile 4 weeks of chess on a high note with a win against Aronian and 4/5 in the rapid segment of the Zurich Chess Challenge.

The difference between a great tournament and a bad tournament is such a fine line.