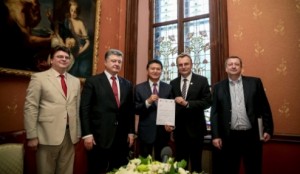 The dates for the FIDE Women’s World Championship Match between Mariya Muzychuk and Hou Yifan are set for 1-18th March 2016, TASS reported. The match will be held in Lviv, Ukraine.

FIDE President Kirsan Ilyumzhinov said that the Ukrainian Chess Federation paid a deposit of 100,000 USD and that the match contract should be signed in the following days.

Ilyumzhinov also met with the Mayor of Kiev Vitaliy Klitschko. The Mayor expressed interest in holding one of the FIDE Women’s Grand-Prix stages in Kiev. Klichko also confirmed the intention to start introduction of chess education in the Kiev elementary schools.