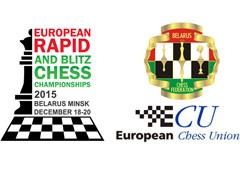 Both Championships are open to all players representing Chess Federations which are ECU members (FIDE zones 1.1. to 1.10), regardless of their title and rating. There is no limit to the number of participants per federation.

Applications must be sent to the email address chessminsk2015@yandex.ru after 1 September 2015. The registration deadline is 20 November 2015. The application shall state the player’s first name and surname, FIDE rating and birth date.

All the information are available on the official website of the championship.

Regulations can be found below or here