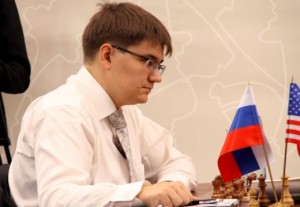 The first ever Fair Play Prize was given out by the President of the Association of Chess Professionals Emil Sutovsky. Russian GM Evgeny Tomashevsky received the honorific prize during the Russian Teams Championship in Loo.

The fact that the award was given during this event is no coincidence, as the reason given for Tomashevksy to win this event was his sportsmanship demonstrated during the previous edition.

During his game against Indian GM Krishnan Sasikiran, the Russian was a pawn down in a rook endgame. The position already looked like it was heading to a draw when Sasikiran made a move and pushed the clock too lightly, his flag fell, but Tomashevsky did not accept this as a fair victory and offered a draw.