Mariya Muzychuk had White and started the game with 1.е4. Her third move (3.Bb5) came as a surprise for Natalia Pogonina, because earlier Muzychuk played mostly 3.d4.

Having spent around 10 minutes on her third move, Pogonina also decided to surprise the opponent and went for the Breyer defense, which she only played a few times. Soon both players were out of book.

Black got a fairly comfortable game. Pogonina developed some counterplay on the queenside and forced White to push a pawn to a5, where it could become a target for Black. In response Muzychuk started regrouping her pieces on the kingside, planning to attack the black king.

In the forthcoming game Black’s maneuvers failed to convince: although Pogonina managed to trade the dark-squared bishops, she did not seize control of the key central square on e5.

Muzychuk doubled her rooks on the f-file and got strong initiative, utilizing her spatial advantage by transferring all the pieces to the kingside for the devastating attack.

Black’s position remained solid, albeit quite passive. Soon after the 40th move Pogonina made a serious mistake, allowing her opponent to win nicely with a knight sacrifice. Muzychuk, however, did not find the decisive blow, and the game got double-edged again. 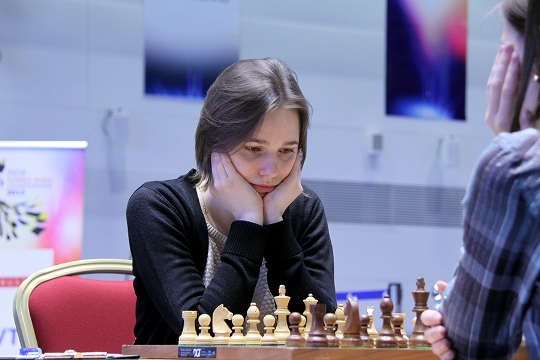 Yet the Russian player failed to put up the most tenacious resistance, and White eventually broke through. On the 58th move Pogonina resigned. The match score is now 1.5-0.5 in Muzychuk’s favor.

The third game is played on April 4 at 3 pm Moscow time. Natalia Pogonina has White.

The final match consists of four games. If the score after four games is tied, the winner is determined on tie-break with quicker time controls.