Sethuraman finished with eight and half points out of a possible eleven and tied first along with top seed Ivan Popov of Russia, who defeated Georgian Grandmaster Levan Pantsulaia in the final round. But better Buchholz tie-break score helped Sethuraman to finish at top while Popov had to settle with runner-up position.

Vidit Santosh Gujarathi beat Georgian Grandmaster Tornike Sanikidze to take his tally to eight points and tied for the third spot along with IM Mozharov Mikhail of Russia who defeated Grandmaster Samvel Ter-Sahakyan of Armenia to achieve his Grandmaster Norm in the final round. Better tie-break score favoured the Indian to lift the second runner-up trophy while Mozharov ended fourth.

Sethuraman won the winner’s purse of Rs. 2,00,000/- while Popov took home Rs. 1,50,000/- and Vidit got the check of Rs. 1,25,000/- in the event sponsored by Oil and Natural Gas Corporation Ltd, Mahindra Ecole Centrale, Andhra Bank, Petronet LNG Ltd and Airports Authority of India. 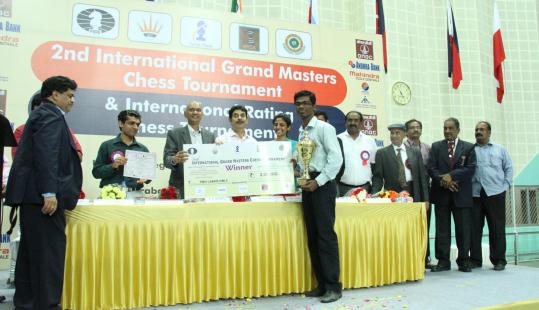 Andhra youngster Ravi Teja S brought cheers to the home crowd as he added his name to the list of International Master Norm achievers after defeating Grandmaster Vishnu Prasanna in the final round.

Meanwhile, third seed Varun V of Andhra Pradesh deservingly won the Category ‘B’ tournament of the event that ended today. Varun logged eight points out of a possible ten to pocket Rs. 100000/- winner’s purse out of a total prize pool of Rs. 500000/-. In the final round Varun defeated state mate Ramana Babu B.

Sammed Jaykumar Shete of Maharashtra, Naveen S Hegde of Karnataka, Ameya Audi of Goa and Vishwanath Prasad of Andhra Pradesh finished in a tie for the runner up spot with eight points. But better tie break score helped Prasad to finish second while Hege, Shete and Ameya finished third, fourth and fifth respectively.

V Varun receiving Winners trophy of below 2100 event and cheque