We sat down with Singapore’s latest IM Tin Jingyao, winner of the ASEAN+ Age-Group Championships U-20 Open soon after he dropped to the Open U-16 category for the Rapid Chess competition where he picked up yet another individual success and also helped Singapore to the Open U-16 Rapid team Gold.

PL: Hi Jingyao, Thanks for taking the time to talk to us and congratulations on winning yet another Gold Medal! Let’s start by asking if this event is your most memorable.

TJ: Yes, I have two IM norms from my last two tournaments, the Zonal Championships and the HD Bank Cup, both in Vietnam earlier this year, and it was nice to get the direct title by winning here and of course also getting a GM norm. 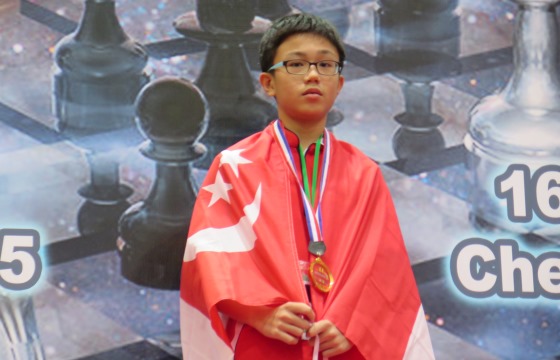 PL: Are there any other special moments you remember in your short chess career?

TJ: My breakthrough event was actually the ASEAN Age Group Championships in 2010 where by winning the Open U-10 I became an FM even if my rating was just 1680. I am very proud this time to have won the first ever U-20 Championship for Singapore.

PL: Five years later your rating is now over 2400 and so you have increased it by 750 points so what do you attribute your success to?

TJ: I started playing at around 8 years old from a computer game where I learned the moves and so my father arranged lessons for me at Intchess which at that time was the place to go to for chess as that had over 40 trainers and 80 percent of the schools. Around 9 year I started taking some private lessons and was first helped by GM Saidali Yuldashev, I soon had my FM title success and by the end of 2012 my rating was 2000 when I started playing other international tournaments and a year later reached a 2300 rating.

PL: It seems that notwithstanding that you have constantly made rating jumps, there has been a big leap from 2300 to 2400.

TJ: GM Yuldashev was a very early trainer and for a short time but until a years ago I was getting help from IM Andrey Kvon but the biggest difference is being included in the National Team Training Program where I have had the chance to play a lot more events while working with my other team members. Most of the work I do myself but now I also analyse with them and that is both useful and certainly more interesting!

PL: Although very modest you seem to be a very confident young man and I have to ask if you expected to win the ASEAN+ Age Group Championships.

TJ: I was hopeful and now happy to have succeeded. It helped that with a strong field that some favourites had early set backs and so I did not have to play all of them and I also managed to have a good finish but even in the last round I had to win to be sure.

PL: So what is next for you? The GM title?

TJ: I am now 15 and have to realistically until 18 to achieve the GM title given the demands of school and then National Service followed by University and I hope to be able to do this in the next 1-2 years.

PL: What would you need to improve your chances?

TJ: I will continue as I have been doing and I think playing 6-8 good tournaments a year is possible. But so far I am limited by doing most of this during my school term breaks. I am also happy with the help from the National Team Training Program where I get to analyse with others.

PL: Well, there is the Asian Continental Championships in August and the World Junior Championship in September as well as the revived ASEAN Championships in October and then the new ASEAN U-20 Masters Cup in November which all seem to fit your requirements! But do you feel that you need more coaching or to have a personal trainer?

TJ: Of course a trainer is always useful as a guide and for example I improved my openings when GM Zhang Zhong pointed out some of what I played did not suit me but I had to find the solution myself by studying and selecting other openings. But as in this case and for everything else the player has to do the work himself.

PL: Thank you for sharing and I wish you every success!

TL: You are welcome!

Four players with perfect score at EIWCC 2016
The 17th European Women’s Individual Chess Championship takes place from 26th May to 8th June at the complex Comandor-Amiral in Mamaia, Romania. The Championship is ...

Ivan Ivanisevic retains the title of Serbian Champion
The 2012 Serbian Chess Championship was held from 23rd April to 5th May in Vrnjačka Banja. Fourteen players with average elo of 2534 competed ...