The tight drama of the 2014 U.S. Championships turned out to be all for show. Several of the nation’s top 22 players took turns stealing headlines and taking their shots at the top, but when the dust of the near two-week long fight cleared, the two champions left standing were the same two champions as before.

Grandmaster Gata Kamsky has repeated as the U.S. Chess Champion, his fifth time holding the title, after defeating GM Varuzhan Akobian 1.5-0.5 in a playoff on Tuesday evening. 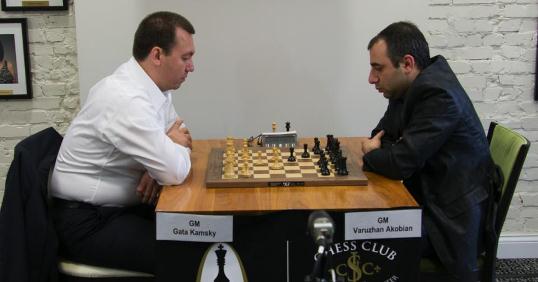 As well, GM Irina Krush turned in a three-peat as the U.S. Women’s Champion, her sixth year as title holder, after knocking out WGM Tatev Abrahamyan 1.5-0.5 in their own playoff on Tuesday. Though both champions admit struggling with the 2014 fields, Kamsky and Krush were the only players to finish undefeated.

“It has been a tough tournament for me, I can feel all these guys: They have been preparing and playing really well,” Kamsky said of his 11 challengers. “Of course, there were a lot of blunders because they wanted to win, but that made everything very competitive. It was nice to win this event.”

Kamsky was fortunate to even be playing chess in Tuesday’s playoff, after struggling to tally decisions for the entire tournament. With only three wins across 11 rounds, a scattering of uninspired draws left even Kamsky himself predicting a new national champion in the tournament’s earlygoing.

But Akobian and GM Aleksandr Lenderman, tied in first place entering the final round, fought each other to a draw when a win would have earned the title outright. It opened up the extra playoff day, which turned out to be a three-way playoff, as Kamsky finally caught pace with a final-round win over Josh Friedel on Monday. It was the first time all tournament Kamsky had appeared on the top of the leaderboard.

“I felt (the three-way playoff) was really exciting, it was really good for me,” Kamsky said. “Considering the game (Monday) that they played where Akobian could have won, I feel very lucky.”

Krush also left her sixth title in doubt, falling sick mid-event and suffering through a stretch of draws that left her a full point behind the leader with two rounds to go. But she caught pace with a win over rival IM Anna Zatonskih in round 8, then was fortunate that another draw in the final round was good enough to keep her up top – though not alone. The women’s competition also featured a three-way playoff.

Krush admitted the national championship is never easy, despite her consistent results.

“All of these championships are hard – it’s not like what people think ‘oh, she wins every year,'” Krush said. “But the thing is, they are always difficult. Maybe last year was my smoothest victory, but a year before that I had a playoff with Anna (Zatonskih), and now I had a playoff with Tatev.

“But this one was definitely hard, I felt like I had one obstacle after another. The fact that I had a mild fever in the middle of the tournament, and then I was drawing these games and found myself so far behind Anna – it just felt like so many obstacles. It’s like: ‘Where is the sun? Where is it? I couldn’t see it.”

Tuesday’s three-way playoff first began with a single Armageddon match designed to knock one player from each race. Kamsky and Krush had earned advantage due to tiebreaks, setting up Akobian and Lenderman, as well as Abrahamyan and Zatonskih, to square off in an Armageddon game. In the specialized match, the player with the black pieces receives draw-odds and only has to avoid losing to advance. Abrahamyan had black and knocked out Zatonskih with a perpetual check; Akobian passed over his draw odds and just brought Lenderman down by checkmate.

“One thing I know is that in a rapid game you need good nerves and a fresh mind,” Krush said. “It’s not really decided by opening preparation.”