A very exciting seventh round was seen today in Norway. Both the leader and his closest follower obtained full points, and the world champion also amassed a victory with the black pieces. As a result, Karjakin is still the sole leader but Carlsen is still just a step from catching him and winning yet another super-event.

Sergey Karjakin played with white against Hikaru Nakamura. His victory over the number one player in the United States is his fifth in this strong tournament. The live ratings list already sees him rise to the 5th place with 2787 Elo points, amazingly gaining 20 points in just seven games.

A Najdorf Sicilian was seen on the board. It looked like the position was going towards a positional battle, but suddenly, things started to get interesting on the kingside. Karjakin created enough threats to force Nakamura to sacrifice his queen for a knight and rook on move 31, but the Russian needed no less than 29 more moves to seal the deal. In the final position, Nakamura is about to lose his only pawn left, giving free-way for Karjakin’s three connected passers. 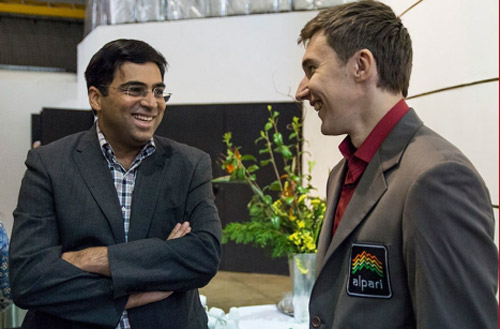 Magnus Carlsen needed 40 moves to take down his compatriot Jon Ludvig Hammer with the black pieces. The best-rated player in the world is gaining 3.8 Elo points in this tournament, creating an even bigger gap with his competitors. With 2871, the 2900-mark does not seem to be astoundingly out of reach.

Viswanathan Anand also used the black pieces to beat Teimour Radjabov. The Indian used a direct expansive attack on the queenside and forced the Azerbaijani to resign on move 34. Anand is sharing third and fourth places with Levon Aronian, who drew his game against Wang Hao yesterday. 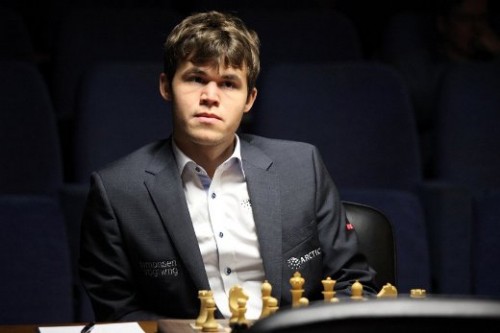 Today is a rest day in Stavanger. Two very exciting round are still ahead on Friday and Saturday.