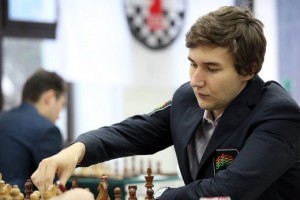 Sergey Karjakin, in his own words, is in good mood for the upcoming World Chess Championship 2016. The Challenger of Magnus Carlsen informed today in his official facebook page, “I am getting optimistic concerning our match in New York… because I have got a USA visa!!!”

With Karjakin’s visa a fact, another obstacle for the World Chess Championship is overcome. Just last week, the venue of the match was announced – South Street Seaport, specifically Fulton Market building (formerly the Fulton Fish Market) in lower Manhattan. The building was damaged by Hurricane Sandy in 2012, and has remained closed and vacant ever since. Recent information shows that the owners plan to reopen the iPic theater there in October. It is possible that the Carlsen – Karjakin match is coordinated exactly with this event.

The next important step for the event is to name the sponsors. The commercial effect of the World Championship can be huge, if properly managed by AGON. There are indications that AGON is coming back on the right track with respect to the commercial effect, as well as the huge audience expected. According to The Guardian, “There are suggestions that rival websites will be allowed to broadcast moves if they agree to show the names of Agon’s official sponsors.”