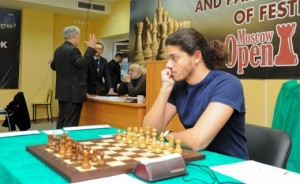 Firat Burak was the only winner of the round, again

In the Young Grandmasters Tournament, we saw exactly the same scenario as yesterday: four draws and a win by the Turkish IM Firat Burak.

With this victory, Burak has caught up with the leaders at 3/4, and given the excellent form he has shown in these rounds, he has become a favorite to get the title in this round-robin event.

The only decisive game of the round was a very sharp Ruy Lopez, where a dynamic balance was held during most part of the game: White had very active rooks supporting his passed pawn on the queenside, while Black had two pieces for a rook and a strong pawn on g2.

Finally, in the time-trouble frenzy, Mikhail Mozharov played the inaccurate 39…Kh7, which allowed White to forcefully get an extra piece (or Black would lose the queen). Definitely a very exciting game between the two young talents!