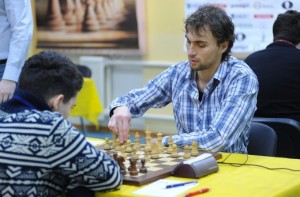 The 7th round of the Moscow Open saw seven draws on the top boards. The pole positions would have remained unchanged hadn’t GM Boris Savchenko achieved a victory on the 8th board. With this result, there are now three Russians sharing the first place.

Savchenko beat the young Ukrainian GM Illya Nyzhnyk in an extremely interesting King’s Indian Defense. The typical scheme with white attacking on the queenside and black going all-in on the other flank was perfectly presented in this game.

The game turned extremely complicated with plenty of tactical blows and it is impossible not to admire both players for their bravery. Savchenko came out on top even though his king looked vulnerable for a while.

Savchenko will play against Dmitry Kokarev on the first board tomorrow.