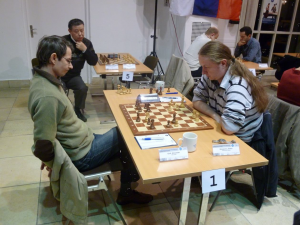 They are followed by a group of no less than 19 players who obtained 4.5/5 points.

Nisipeanu was much better after move 15th in his game against Graf and easily converted, while Bluebaum defeated Ukrainian GM Olekseinko in a complicated and unclear duel.

IM Schneider has almost joined the leaders, having a kingside attack against GM Lenderman, but a blunder led the  game to a draw.

The duels between the other leaders Piorun-Prusikin and Khenkin–Rambaldi also finished equal.

You can replay the top games below, kindly provided by IM Ilya Schneider himself!