The first round of the fourth stage of FIDE Grand Prix tournament in Thessaloniki got under way on 22nd May, with the Greek-Russian businessman Ivan Savvidis, main sponsor of the event, making the first symbolic move in the game Kamsky – Dominguez.

After playing 1.e2-e4, Savvidis told Kamsky “now you have no right to lose this game”. The American champion lived up to the expectations and went on to defeat Leinier Dominguez.

The first game to finish was the match between Ruslan Ponomariov and Fabiano Caruana. The players opened with Ruy Lopez and Caruana pointed that 9…Na5 was an important move to hold the setup. Ponomariov noted that none of the pieces or pawns were exchanged before move 16.

Caruana then released the tension in center and moved his Knight to f4 because there was no other way to defend the e5-pawn. Within the next dozen of moves a large number of pieces were exchanged. After the Queens also went off, a draw was signed according to Sofia rules.

Ponomariov was happy with the result as “it is important to properly adjust to the new setting, and the new tournament.” He also added that he is playing similar setups with black, that he is familiar with many opening ideas, and that is why he took some time to find the most appropriate plan. He played all the logical moves, but black also played well and the draw is a fair result.

Caruana reminded that most of the players competing in Thessaloniki also played last month in Zug Grand Prix and that he has the feeling “of playing the same tournament again”.

Ponomariov finally said that he is happy that the tournament is receiving a lot of attention from media and local chess fans. 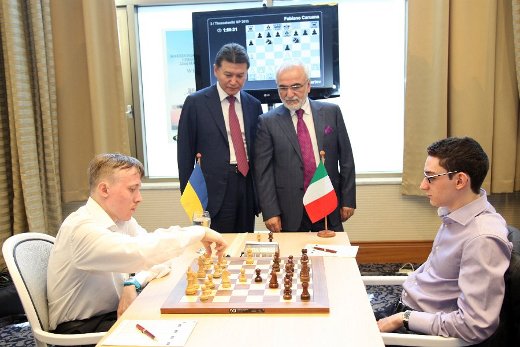 Peter Svidler was the first to score a victory in Thessaloniki. His game with Etienne Bacrot started as Semi-Tarrasch and for awhile it looked like black is doing fine. But later he started to err and Svidler used the opportunity to invade the seventh rank with the rooks.

Bacrot admitted that he “lost control some time around 19…h6.”. Svidler pointed that 21…Ba3 was unnecessary and that 21…Rc8 was to be preferred. He also criticized the retreat on 22nd move and suggested 22…Qa5 as possible improvement. White quickly mopped up and finished the game in 27 moves.

Svidler also mentioned that he looked at 13. Ba3, but eventually black is on time to equalise since white doesn’t have the winning move because of his own backrank weakness.

Svidler feels greater pressure in Thessaloniki than he had in Norway Chess tournament because this event is a part of the World Championship cycle. He’s been playing continuously in many tournament but after the Thessaloniki Grand Prix he will probably take a break until the World Cup in Tromso. He added that he might do live commentary for the Tal Memorial.

Bacrot said he had some time to work on the openings, but he still didn’t get into the proper competitive shape. He hopes to play better as the tournament progresses. 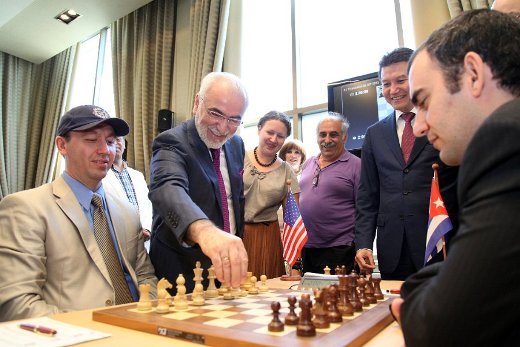 Gata Kamsky and Leinier Dominguez engaged in the Sicilian Naidorf defence. As usual, Kamsky went for the positional line and included his favourite a2-a4. He said that 15…Kh8 was interesting and that he got nothing out of the opening. That is why he decided to exchange the Queens and regroup the pieces.

In the ensuing middlegame white retained some pressure after 31. e5. Dominguez criticized 32…f5 and felt that he should have played something else.

Kamsky pointed that 36…Be5 was a mistake which handed advantage to white, and suggested 36…g5 as possible improvement. Dominguez tried to hold on but on move 44 he made a blunder in an already difficult position. 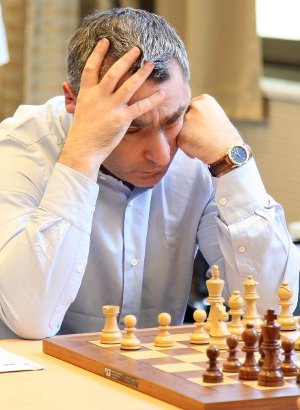 Vassily Ivanchuk and Alexander Morozevich played the King’s Indian defence where white revived the old main line with 9. Nd2. He proceeded in the straightforward manner with a3, Rb1 and b4.

Black tried to contain white’s action on the queenside with 14…Ba4. Morozevich pointed that he waited for the opponent to take on a4, rather than himself exchanging on b3. His reasoning was that Nc3 is more useful for white than Nb3.

Morozevich noted that 17…Qa8 was a blank shot and that 17…Kh8 with idea Ng8-Bh6 would have been a better try. He conceded that white obtained significant advantage after pushing a3-a4-a5.

Ivanchuk agreed with this estimation and said that the rest of the game was simply a matter of good technique.

However, black put up a strong resistance, and Ivanchuk couldn’t find the right plan to improve on his advantage, so he decided to trade all the pieces and make a draw. He said he will analyse the game in depth after the tournament in order to improve his technique. 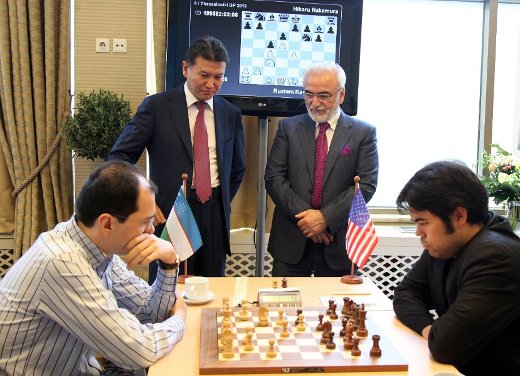 Rustam Kasimdzhanov started the event with a victory over Hikaru Nakamura. The American used a slightly altered King’s Indian Defense with black. where he chose to exchange the always important dark-squared bishop.

When the queens were exchanged on move 29, white was able to grab a pawn. The path to victory looked quite long, however. The ensuing knight vs. bishop endgame was not easy to convert.

Kasimdzhanov found the right plan to get the full point when he decided to give up his passed d-pawn in order to win the pawn on the h-file. Nakamura did not wait for his rival to execute the plan and resigned on move 69.