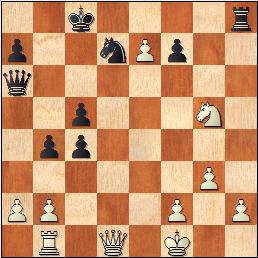 The position in Van der Hoeven – Van Kampen after 22 moves

Correspondence chess is a type of the world-wide well-known game of chess, which has been played between towns, chess clubs and/or individuals, by using traditional postal transmissions or modern ways of transmission using a dedicated webserver.

Alekhine, Keres and Euwe have been well-known enthusiastic correspondence chess players during some periods of their chess career.