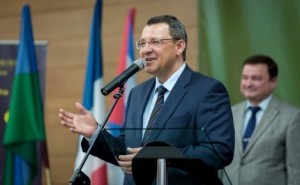 The Mayor of Khanty-Mansiysk and the President of Ugra Chess Federation Vasily Filipenko attended the laying out of the “Chess Stars Alley” on the second rest day of FIDE Grand Prix. This presented an opportunity for a quick chat.

Goran Urosevic: Khanty-Mansiysk is again hosting a big chess tournament and a lot of attention in the world is turned towards Khanty-Mansiysk now. How do you comment on this?

Vasily Filipenko: We are very happy to host FIDE Grand Prix Final in Khanty-Mansiysk. This is not the first major chess tournament that takes place here but still we are very excited to welcome it.

Of course, it is a great pleasure for us to see the world best chess players here in the capital of Ugra. I hope that this is mutual and chess players are also glad to be back in Khanty-Mansiysk not only to play chess but also take part in events like this.

We are enjoying this Grand Prix Final and getting ready to host another big chess competition in Ugra – World Junior Championship.

Goran Urosevic: You have organized all kinds of events here – Women’s World Championship, World Candidates, Chess Olympiad… It’s very difficult to count all of them. And you still continue. Could you tell us something about your commitment to work with FIDE and European Chess Union promoting chess in Ugra and all over the world?

Vasily Filipenko: I feel very grateful to FIDE in general and to Kirsan Ilyumzhinov personally.

Our cooperation was very productive from the beginning. We are helping FIDE and FIDE is helping us to promote chess.

As I have already mentioned during the Opening Ceremony of Grand Prix in Khanty-Mansiysk, we are participating in FIDE program “1 billion people playing chess” and the assistance of FIDE makes it easier for us to promote chess in Ugra.

FIDE tournaments attract a lot of attention not only of our young chess players that are watching the games here in Ugra Chess Academy, but also of many people that follow them in internet. Some of them decide to begin to play chess; others resume their interest in this sport after watching such tournaments.

We are also closely cooperating with Russian Chess Federation and this helps us a lot to make our plans come true.