The last round of 42nd World Chess Olympiad in Baku and the final session of FIDE General Assembly took place on 13th September. The main topic of the discussion of delegates of member countries of FIDE was choosing the city that will host the Chess Olympiad 2020. Khanty-Mansiysk was bidding as the candidate city.

The delegation from Khanty-Mansiysk autonomous region headed by the governor of Ugra Natalia Komarova has arrived to Baku to ask the delegates of the Assembly to support the bid of Khanty-Mansiysk. 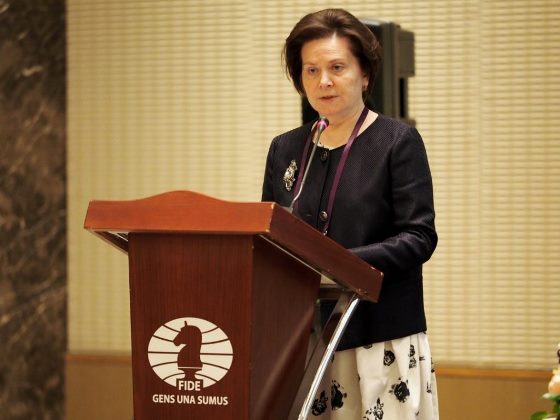 The head of the region has addressed the audience with the speech devoted to the big experience of Ugra in hosting major chess tournaments. Besides, the participants of the General Assembly had watched the promo video of the candidate city.

The motto of FIDE says “We are one family”. Nowadays it is much sought after in the world, – said Natalia Komarova. — The power of chess mind has its special, humanitarian mission – to unite millions of people on all continents; to put together traditions and innovations. That is what we will do on the Olympiad in Ugra. The propose to conduct it under the motto “Uniting the Universe”. 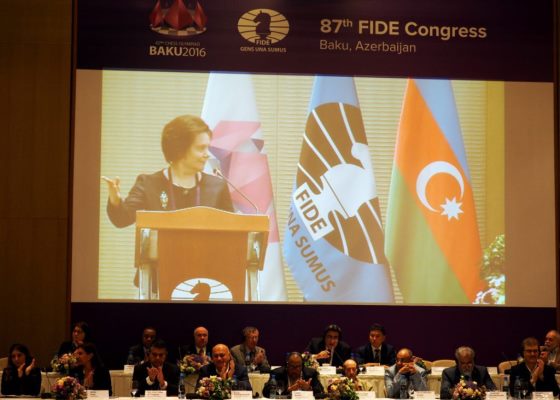 In her presentation the governor of the region has also mentioned the issue of integration of chess in the educational process in Ugra. “Chess is the integral part of life in Ugra, — informed the audience Natalia Komarova, — Ugra is one of the leading regions in the world in conducting big chess tournaments in Internet. Every year they attract around 1500 chess players from many parts of the planet: from Peru and USA to China and India. Starting from a new academic year Ugra has applied chess as a compulsory subject for pupils. Now children in all schools of Ugra will learn to play chess”.

To support the governor in her speech the General Assembly was also attended by the ambassador of Russia in Azerbaijan Republic Vladimir Dorokhin, the president of Ugra Chess Federation and the mayor of Khanty-Mansiysk Vasily Filipenko and the executive director of the Organizing Committee of the Chess Olympiad 2020 Valery Radchenko. 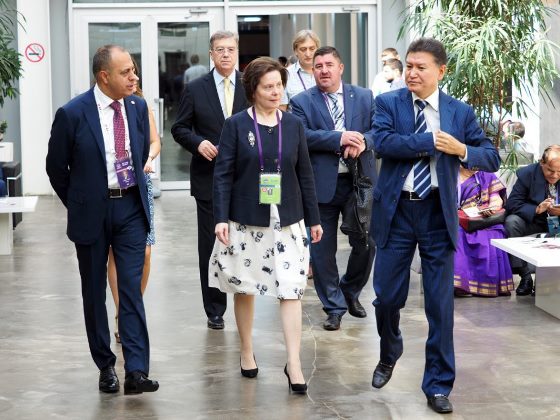 The participants of the General Assembly supported the bid of Khanty-Mansiysk as a city that will host the World Chess Olympiad 2020. Summarizing the results of the meeting the president of FIDE Kirsan Ilyumzhinov has noted that the Chess Olympiad held in Baku was the best in the history. “Let us hope that Khanty-Mansiysk will be able to conform these high standards and in 4 years we will have the best Chess Olympiad in history as well”, – concluded the head of FIDE.

Upon the end of the General Assembly the delegation from Ugra has attended the Baku Crystal Hall to watch the last round of the Olympiad. The head of the region has made the first move in the game of Russian grandmaster Vladimir Kramnik and Daniele Vocaturo representing Italy. 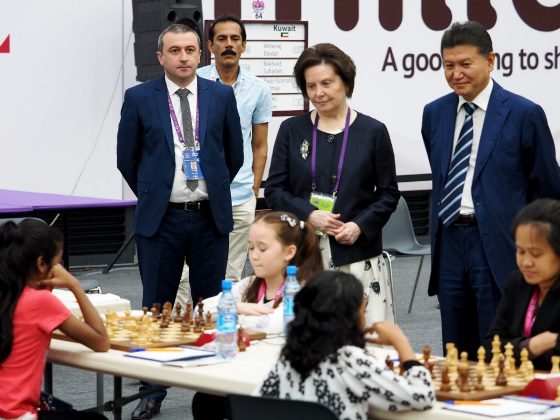 And in less that in a week Khanty-Mansiysk will become the venue of the FIDE World Youth U14, U16, U18 Championships 2016. More than 400 chess players from many countries will come to the capital of Ugra to compete for the title of the world champion in U14, U16 and U18 categories.