The young Norwegian Aryan Tari made a sensational result in the Open Norwegian Championship scoring a GM norm before ever having made any IM norms.

The 13-year old, FIDE rated at 2293 on the March list, is considered to be the greatest chess talent in the country since Magnus Carlsen. Last year he became the youngest ever Norwegian Junior U20 champion having just turned 13 years.

His best result in the World U12 Youth Championship is 5th place.

In the Open Norwegian Championship, Aryan was 23rd seed, but finished at 7th place with 6 out of 9 points. 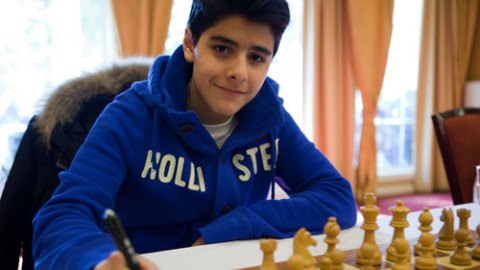 The overall winner of the tournament is GM Eduardas Rozentalis from Lithuania who finished with 7,0/9 ahead of the group of followers, continuing the fine shape from the recent Jersey Masters.

With the fantastic result, Aryan picked up a whopping 51 points climbing rapidly towards 2400. Turning 14 in June, Tari is well on his way to becoming one of the youngest grandmasters to ever achieve the prestigious title in chess. Magnus Carlsen himself achieved the title at the age of 13 years and 4 months.

Magnus also graciously praised his young compatriot at the final press conference after the victory in Candidates Tournament.

Aryan Tari, with parents originating from Iran, is leading the group of Norwegian chess talents who are selected to be on one of Norway’s three teams in the 2014 Chess Olympiad in Tromsø.