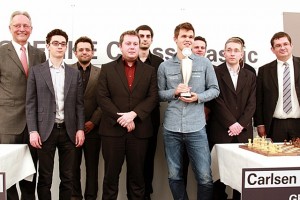 The reigning World champion Magnus Carlsen is the winner of 2015 Grenke Chess Classic!

However, the trophy didn’t come easily. Carlsen tied for the first place with the top German player Arkadij Naiditsch, although the latter defeated him in the third round of the event.

According to the tournament regulations, the winner should have been decided after an additional match.

Carlsen started with a victory in the first rapid game, but Naiditsch bounced back winning the exciting second game.

The players drew the next two blitz games and the Armageddon game (6′ + 2″ vs. 5′ + 2″) was decisive. The drawing of lots destined white pieces for Carlsen and one more minute at the start of the game, but he needed a win to claim the title.

Arkadij Naiditsch chose Sicilian Defence as an answer of Carlsen’s first move 1.e4 and the game became very sharp. Carlsen sacrificed an exchange in order to use the light squares in the opponent’s camp. Soon the mating threats in front of Naiditsch were inevitable and he was forced to resign.

You can replay the games and the thrilling playoff match below!