Gawain Jones on Sunday stormed into a 6-point lead in the British Knockout Championship Final, dispatching Luke McShane with a neat combination starting with 25 Bxf7+ that left his fellow English GM a pawn down with a hopeless position.

Out of an equal French Tarrasch, Jones as White banked on a well-placed central bishop to counteract McShane’s bishop pair. After an awkward rook placement by McShane (21…Rc5?!), Jones was in the driving seat, and the unfortunate 24…Bd6 set up Jones’s killer blow.

Jones now has a large advantage going into the Rapid and Blitz portion of the match, as the 2 Rapid games are worth 4 points each and the 4 Blitz games count for just 2 points each.

In the Third Place Playoff match, Mickey Adams and David Howell drew in 46 moves of a Ruy Lopez Anti-Marshall, in which Adams as Black had an endgame advantage for a while, but Howell managed to escape.

Live coverage of the British Knockout matches resumes on Monday at 14:00 UTC. 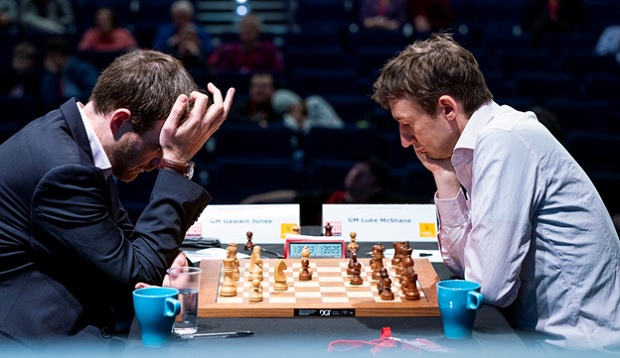 Gawain Jones plays the Tarrasch Variation of the French Defence against Luke McShane in the second Classical game of the British Knockout Final on Sunday. (Photo: Lennart Ootes)