The Paris IdF Blitz International 2013 was held on February 17th at the Halle Carpentier in Paris. A large crowd of 448 players gathered to participate in the event’s 7th edition.

European Blitz Champion Maxime Vachier-Lagrave took the first place after edging his compatriot Etienne Bacrot by a half point margin. The impressive score of 12/13 earned Maxime a 2995 rating performance. Vachier-Lagrave pocketed 1,500 Euros and the claimed the title of French Blitz Champion.

The Open Accession, reserved for players with a rating Elo between 1600 and 2000, was won by Albert Licayan. 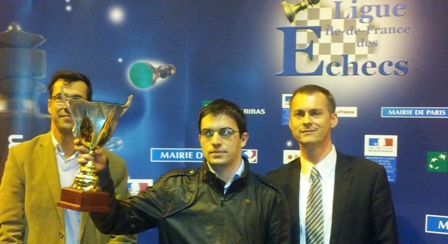