The London Grand Prix 2012 has been given an official start last evening at a simple, yet stylish opening ceremony at the 18th century Somerset House, on the south side of the Strand in central London, England. The FIDE World Chess Championship cycle 2012-2014 was inaugurated, the drawing of lots was performed, and now everyone awaits the show on the boards to begin. Games start at 15:00 CET and can be followed with computer analysis here.

The opening ceremony was attend by the cream of the chess society in London. FIDE President Kirsan Ilyumzhinov was there to greet the organizers and players, he even enjoyed some blitz games later on. Other FIDE representatives attending included Executive director Nigel Freeman and VP Ali Nihat Yazici.

Local chess media was also active with important journalists as John Saunders at the scene, while among the audience could be spotted many familiar faces as Gelfand’s second Alexander Huzman, Peter Leko’s wife Sophie, the President of African Chess Union Lakhdar Mazouz, the U8 European bronze medalist Joshua Altman, etc.

George Sheynker from Labortas Jewelry House was also there, showing his interest in chess is not limited to the Caissa Cup.

Among the very special guests was IM Malcom Pein. He is the organizer of the coming London Classic 2012, and certainly has exchanged experience with the London GP organizers.

He was there with the latest player confirmed for the London Classic – Luke Mcshane, and also had the chance to greet some of the other participants in the December tournament – Hikaru Nakamura and Michael Adams. 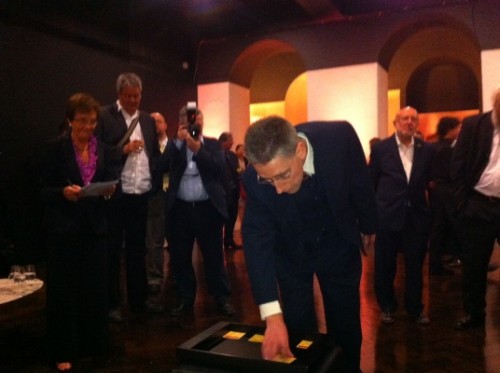 Michael Adams is a last minute replacement, but always ready for good chess 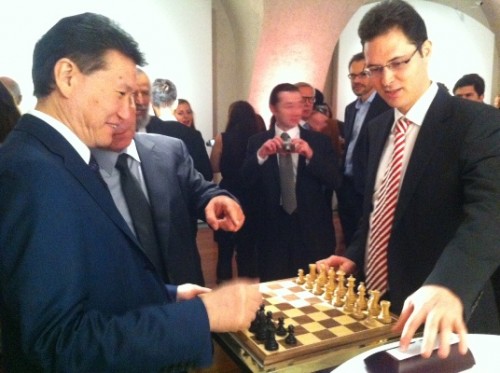 The FIDE President playing with Peter Leko at the blitz session

Official website of the London Grand Prix / Photos by FIDE