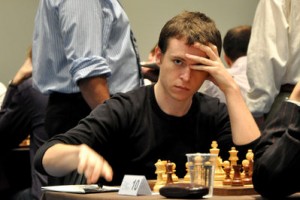 The 33rd Benasque International Open is being played over 10 rounds of Swiss system from 4th to 13th July at the Sport Pavilion in Benasque, Spain.

After five rounds, the only player that managed to keep a perfect score in the huge field is Israeli grandmaster Maxim Rodshtein. To get this impressive score, he had to defeat two strong GMs in the last two rounds.

His last win over experienced Ukrainian GM Viktor Moskalenko is worth studying. Rodshtein, playing with black, reacted actively to his opponent’s aggressive intentions in the opening; the result was a very sharp struggle where black’s passed b-pawn was the key factor in the result.

A large group of ten players is close behind the leader on 4.5/5. Among them is first seed Julio Granda, Venezuelan Eduardo Iturrizaga, Chinese Ni Hua and young American IM Daniel Naroditsky.

Spaniard Renier Vasquez is also half a point behind, and will have the chance to play the leader in the sixth round.

Some strong grandmasters must be quite disappointed with their performance, as they were not able to defeat the apparently weak opposition.