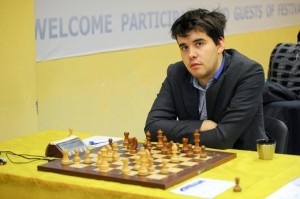 Nepomniachtchi is now among the leaders

The two top boards of the Moscow Open finished with draws, making the new maximum score 4,5/5. The American GM Ildar Ibragimov was the one closest to achieve 5,0/5, he got a pawn advantage against Rauf Mamedov, but could not convert it into a full point. This allowed a lot  of players from the chasing pack to join the group of the leaders.

Among the new leaders we can find the rating favorite Ian Nepomiachtchi, who beat the Indian G.N. Gopal with the black pieces in 52 moves. The Russian star showed his class in a positional setup of the Sicilian, where he got to a situation with a slightly strange material balance: two pieces for a rook and a pawn. Even though the Indian seemed to have a dangerous pawn on f7, the activity of Ian’s pieces proved to be stronger.

The other winners on the top boards were GM Dmitry Kokarev, GM Igor Kovalenko, and GM Pavel Maletin.