This month Webster University and the Susan Polgar Institute for Chess Excellence (SPICE) bring six of the best chess players in the world – including two Webster students – to Webster’s home campus.

They’ll be competing in the category-18 SPICE Cup Invitational 2012, the highest-rated chess tournament of its kind in U.S. history.

The tourney kicks off with a free and open-to-the-public Welcome Ceremony at 1 p.m. on Friday, Oct. 12, in Room 102 of Webster’s East Academic Building, 545 Garden Ave. in Webster Groves, Mo. 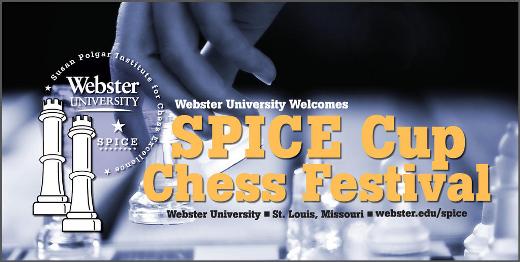 All six players are multiple-time Olympians. They include:

During tournament play, the six competitors will face one another twice, once with black chess pieces and once with white pieces.

Alongside the SPICE Cup Invitational, the SPICE Cup Open will take place on 16-20th October at the Sheraton Clayton Plaza Hotel 7730 Bonhomme Avenue St. Louis, MO 63105. The prize fund is $10,000 guaranteed and there is no entry fee.

Currently there are 45 players registered for the Open, and among them 13 Grandmasters, 14 IMs, 1 IM-elect, 23 foreigners.