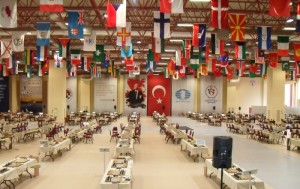 The opening ceremony of the 40th World Chess Olympiad will take place today, August 27th, in Istanbul. Venue of the official start of the competition will be at WOW Convention Center at 21:30 local time.

The ceremony will be broadcasted live in 4 languages simultaneously. It will include a warm welcome to the participants, presentation of the host country, a rich cultural program, national and FIDE anthems, officials speeches, and the drawing of colors for the first round.

The opening ceremony will be preceded by a press conference of the Turkish national teams at 19:00 and by the Captains meeting at 20:00, both to be held at WOW Hotel.

Everyone, who comes first time to Istanbul, is obliged to see one of the greatest historical monuments Hagia Sophia Museum.

Also don’t pass by the Sultan Ahmed Mosque Blue Mosque which is in front of  Aya Sofya. The whole area is very beautiful and lively. Topkapı Palace and Archeological Museum are also not far from that place.

It’s also important to climb to Galata Tower and check fantastic view to Istanbul from this point. Those, who are able to reach the top in the evening, can get a taste of the Turkish nightlife at the nightclub.

Bosphoros Bridge, which unites European and Asian sides, changes the colors in the night

Don’t miss the opportunity to get into one of many ships and do a trip through the Bosphorus and Princes’ Islands.

Istanbul is truly a world city which everyone should visit at least once in their lifetime. It is an enchanting blend of Eastern and Western culture, a vibrant, modern setup with a unique identity. It’s rich past coexists alongside youthful exuberance. Although no longer the capital of Turkey, Istanbul still remains the country’s cultural and business center.

It is a city of contrasts, bustling with the cacophony of 21st century life, and is yet achingly beautiful. It is set in a stunning location, surrounded by water, which is the narrow strait of the Bosphorus and the serene sea of Marmara separating Europe from Asia. Istanbul has a foot in each, celebrating the best of both heritages. As Byzantium, Constantinople and finally, Istanbul, it has been the capital of three Empires, each leaving their mark in the form of stunning palaces, castles, mosques, churches and monuments. The legacy of its chequered past can be seen on every turn of the modern city.

Rumelian Castle  is a fortress located in the Sarıyer district of Istanbul on a hill at the European side of the Bosphorus. It was built by the Ottoman Sultan Mehmed II between 1451 and 1452. You can enjoy walking and photo shooting there.

If you want to escape from the ground than go to the Underground Bascilica Cistern. It is a great underground chamber used in times of siege in the 6th century and is the largest and most beautiful Byzantine cistern of its kind. Clever spotlighting makes the water shimmer with colored dancing lights. One can also enjoy classical music in that building with a very special acoustic.

Everyone can find lots of souvenirs, carpets, jewelry, leather clothing in the Grand Bazaar.

Those who like fishing can enjoy it on one of the main bridges in Istanbul. Under the same bridge you can find many restaurants and cafeterias.

Don’t miss a chance to take the Nostalgic tram in Taksim square. At the same time it’s better not to risk your life in order to avoid paying by using such illegal riding J .

You can enjoy visiting Miniaturk outdoor museum. It is a magnificent museum with miniature models of over 100 architectural works representing the rich historical and cultural heritage of Turkey. All miniatures were made in a scale of 1/25 with the aesthetic sensibility.

Istanbul in the night is bright and colorful. Don’t miss an opportunity to walk in the city center in the night…

and during the day.

After all those excursions you may get very tired, so take a rest in one of the numerous parks of Istanbul on your way to the playing hall…

Don’t hesitate to check your preparation on gigantic chess board in Miniature Museum!