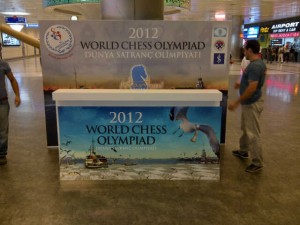 2012 Chess Olympiad desk at the airport

Hello everyone and welcome to the live countdown to the Chess Olympiad 2012 on Chessdom.com! We continue our daily minute by minute updates and six days before the official start of the event we will refresh the latest news regarding the Olympiad in Istanbul, interviews with top players, polls, photos, videos, and more.

This the the live countdown to Chess Olympiad 2012 (day 4), to see the previous countdowns follow the links below

With this update the team of Chessdom.com is wrapping up the minute by minute updates part of our countdown to the Olympiad. Starting tomorrow several team members will arrive in Istanbul and the countdown will continue in the form of special on site reports from Turkey.

Stay tuned for photo reports, videos, and news, and do not miss the live games from the 2012 Chess Olympiad

You can read all the live countdown updates from today here in Spanish with the addition of some specific regional news.

The Spanish version of Chessdom will be especially active during the Olympiad, as this is the moment when the Spanish and Latin stars are collecting at one place and each nation will be following with interest the games of their heroes.

The Chess Drum also notes the teams to watch out for:

This Caribbean team has always been a bit quiet, but of course the strong tradition in chess provides motivation to excel on the big stage. Oleiny Linares-Napoles was the leading scorer in 2008 with 9/10… good for a silver medal. In 2010, the team was led by WGMs Sulennis Piña-Vega on 7/9 and Yaniet Marrero López who won gold with 7/8. They improved their team standing from 25th in 2008 to 4th in 2010. Cubans are deceptively strong and their ratings may be a bit deflated given their location and difficulty to play in strong international tournaments. They very well could get into a medal position.

Led by two foreign imports, Ali Nihat Yazici is attempting to build a respectable team and appears to be sparing no resources to do it. Serbian native Dragan Solak and Alexander Iptov, born in the Ukraine, will man the tables for Turkey this year. Ipatov just won the World Junior Championship and will be in great form. Yazici even stated that he would import players in the future on a similar basis. (see report from Chessdom) They have also raised some native Turkish players as Grandmasters. While they most likely will end in the respectable 30th-50th place, look for the Turkish team to score some upsets.

Dr. Daaim Shabazz, author of the prestigious website The Chess Drum gave his predictions for the Chess Olympiad 2012. He believes the final top 3 will be 1. Armenia 2. China 3. Russia, with Hungary, USA, Ukraine, France, Netherlands, Poland, and India to follow.

In the regional standings, the Chess Drum prediction is:

In the women section the top 3 teams prediction of the Chess Drum are 1. China 2. Russia and 3. India with Georgia, Cuba, Ukraine, USA, Poland, Armenia, and Iran to follow.

The regional predictions for the women section are:

Sahaj Grover, who completed requirements for the GM title at the World Junior Chess Championship 2012, shared with Chessdom his thoughts about the Indian team. He was straight forward in his statement, “India can fight for the medal even without Anand on the team. We have the players, the experience, and the skill to do it.”

Sahaj Grover is India’s youngest IM and a medalist from the WJCC 2011.

With deep sadness we learned that Christian Bauer‘s son has passed away just 4 months old. The Chessdom team express deep condolences to Christian, his wife Nathalie, and his family. Our thoughts are with you Christian :(

The French championship players have decided to cancel the last round of the event. It will go directly to tiebreaks (Vachier Lagrave, Edouard, and Bacrot), given the tragic circumstances GM Bauer will not participate.

Ukraine has only one expectation from their team – the golden medal. The national media are optimistic after the gold medal from 2010. Going by the saying “do not change a winning horse”, Ukraine is again with Ivanchuk, Ponomariov, Efimenko, Eljanov, and Moiseenko.

Uzbekistan has finished the training camp for the World Chess Olympiad 2012 in Istanbul. The main hope of the team is the ex World Champion Rustam Kasimdzhhnov. The second of Anand and coach of the 2011 ETCC champions is going to be in one team with GM Marat Dzhumaev, GM Anton Filippov, IM Djurabek Khamrakulov, and IM Andrey Kvon.

In the women section UZB comes also with a strong team and a new hope – the young Sarvinoz Kurbonboyeva who shared 3rd-5th place the World Youth Chess U18.

Sergey Karjakin explained to Gazeta.ru that he has no idea at what board he is going to play. “Still my goal is to get gold medal no matter on what board I play,” said Karjakin. Whether this is a psychological game or not, Azerbaijan’s coach also said that he does not know who will be on first and who on second board for AZE.

In any case Karjakin is ambitious and on various occasions he claimed that he wants to reach 2800 soon.

Gabriel Sargissian spoke about the preparation of Armenia for the Chess Olympiad, “The most important of the training sessions we had is building the team spirit.” He also added, “Russia, USA, Ukraine, China, and Israel are the strongest teams, but I still see Russia as the main competition.”

Note also that the info bulletin (see update 12:45) is in 4 languages, English, Turkish, Spanish, and Russian.

The 40th Olympiad will also have an iPhone application that is available for download. The application will have results, photo gallery, news, videos, etc. 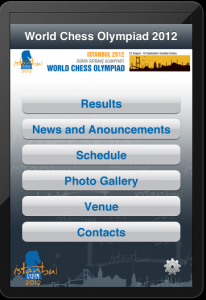 And now something that you have not seen at previous Olympiads: the organizers have prepared a 60 page colored pdf info bulletin with all the information required for the players and visitors. The bulletin is high quality flip through magazine in several languages. It is certainly a useful detail that should become a standard for Chess Olympiads. See the bulletin here.

Brazilian Grandmaster Alexandr Fier spoke to Chessdom about his team, “For the first time Brazil is lining four players that are above 2600 (Leitao, Vescovi, Milos, Fier). Some do not have much playing practice this year, however, they are all experienced and we have good chances at the Olympiad. Our 5th board GM Krikor Mekhitarian is also a key player, and he will contribute a lot to the team’s performance.”

A few more statements by the Hungarian players:

Balogh Csaba, “We had a training camp for two weeks. I am not used to such breaks, I have not played since EICC in April. But just as the other players, I am confident that we will quickly gain momentum.”

Hoang Thanh Trang, “We have a young and enthusiastic team, I hope we will be able to surprise the opponents”

Petra Papp, “My thoughts this year were dedicated to the Olympiad. I played a lot of competitions in order to practice. And I prepared not only chess wise, but also physically, as the Olympiad is a long competition and one needs stamina to the end.”

Judit Polgar noted, “It is important that this is a team competition and match points matter. Now we can and should play like a team, if one board wins the others can strive to keep the score positive. The key is to have a balanced team, as a win on the first board is equally important as a win on the last board.” 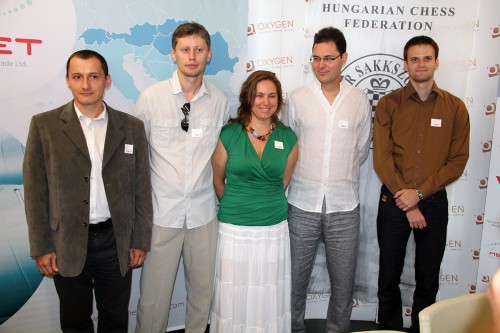 The teams news today start with Peru. After we presented you the problems with GM Granda at the 16:00 CET update of “7 days left to Olympiad” (see here) today we see why the second best women player of Peru WIM Luciana Morales is not coming to Istanbul. WIM Morales has been removed from the possible players list for not taking part in the National championship in the month of May.

Only Julio Granda, Deysi Cori, Jorge Cori and Emilio Córdova are officially invited without the need to compete at the national event, but Granda and Cordova did not reach an agreement and will not be in Istanbul.

Upon this news WIM Luciana Morales found her own sponsors for the trip to Istanbul, but the federation did not allow her to participate and announced the women team as: Deysi Cor, Ingrid Aliaga, Cecilia Casusol, Ann Chumpitaz and Vanessa Sánchez

More about the story of WIM Luciana Morales here

Hello everyone and welcome to the live countdown to the 2012 Chess Olympiad in Istanbul. Only 3 days are left to the start of the competition and we are approaching one of the most important moments for any large chess event – the arrivals. The 2012 Chess Olympiad organizers have prepared to assist and make in anyway comfortable the coming of the players. Right after the passport control (or visa if you need) comes a meeting point for the chess players. To recognize the two desks of the Chess Olympiad, see the main photo of the article. Click on the photo to view it full size.

Here is a note by TSF President Ali Nihat Yazici:

We work very hard to succeed a good organization with 40th Olympiad and 83rd FIDE Congress. Those who has made registration and send their travel details will be picked up with a good service from Istanbul Airport! When you arrive to Istanbul Airport, you will pass passport control (also visa if you need). Then just after the passport control you will see those two desks (photo of one of them given here). Go there and introduce yourself. Then you are in safe hands for all services for your luggage, your transportation to the hotel you were given! We hope you will not have any need, but with lost luggage case you will get assistance. Do not miss those two desks. If you manage somehow to miss it, still you have one more chance after custom point, on arrival hall, in front of AVEA shop one more desk for help.

Do not leave airport without finding our guys, they will arrange your transport to hotels. Please help us with those instructions to have better assistance! Since Istanbul Airport does not allow any car parking outside due to traffic and security, we should call busses for your delegation. If you contact our guys everything will be in good order.

We try our best, but we may only succeed with your help. Help us by following this instructions and let us make one of the best organisations in the history together for your happiness.

We miss you in Istanbul and we are impatient for Monday night 21.45!