An intense fight is on the cards tomorrow, as the trio Karthikeyan Murali, Vidit Santosh Gujrathi and defending champion SP Sethuraman of PSPB have theoretical chances to win the title.

Vidit could make a draw only today to reach 8 points and Sethuraman came back into reckoning by collecting 7.5 points. Karthikeyan Murali has an edge over the other two as he needs only a draw to clinch the title. 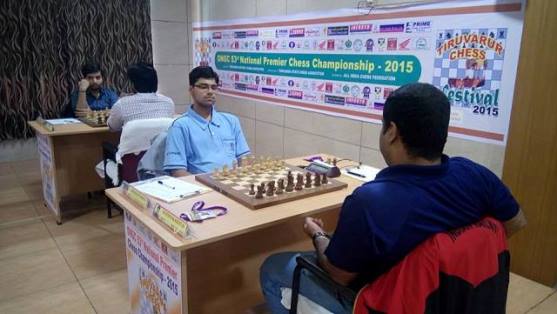 In the advanced variation against the Caro Kann defence by Swapnil Dhopade of Railways, former under 16 world champion played a steady middle game to get advantage slowly. Swapnil lost his knight to prevent Karthikeyan’s a- file pawn moving to eighth rank. Karthikeyan dashed the hopes of Swapnil in the rook and bishop vs rook end game, with each having one pawn.

Vidit employed Grunfeld defence against former under 12 world champion Deep Sengupta, also from PSPB. Though Vidit won two pawns, he had to struggle to obtain a superior position, because of Deep’s two well placed bishops in the open position against Vidit’s two knights. Vidit fought tooth and nail in the exciting end game, witnessed by a large crowd, but Deep had a strong defence to force a draw.

The third successive win by defending champion SP Sethuraman has put him back into the contention for title. In the reversed Kings Indian defence against team mate and grandmaster MR Venkatesh, Sethuraman’s two knights played havoc at the opponent’s ranks, leading to win a pawn and exchange also. Once the queens were traded, Sethuraman’s win became a reality.

Praneeth Surya of Telangana could not repeat the form he exhibited in earlier rounds and went down meekly to IM K Rathnakaran of Railways, who played the French defence. After castling on the long side, Rathnakaran made in road into the enemy’s camp, by pushing the king side pawns rapidly. Controlling the h- file with queen and rook, Rathnakaran destroyed Praneeth’s king side by mopping all the pawns off. It took just 33 moves for Rathnakaran to decimate Praneeth.

GM Neelotpal Das of PSPB was cruising comfortably, after his opponent Abhijit Kunte gave up his knight to break open the former’s king side. Disaster struck, when Neelotpal missed a winning combination and donated the point to Kunte.

Loss of two pawns in the middle game by IM P. Shyaam Nikhil of Tamil Nadu enabled GM M Shyam Sundar of AAI to register a comfortable win in a game of English opening.

The Kings Indian attack by IM P. Karthikeyan of Railways against his team mate IM Arghyadip Das ended in a passive draw after the formal 25 moves.