Both GM Deep Sengupta of PSPB and IM P. Karthikeyan of ICF, a unit of Railways scored 8 points, but better tiebreak score favoured Deep to finish runner up. 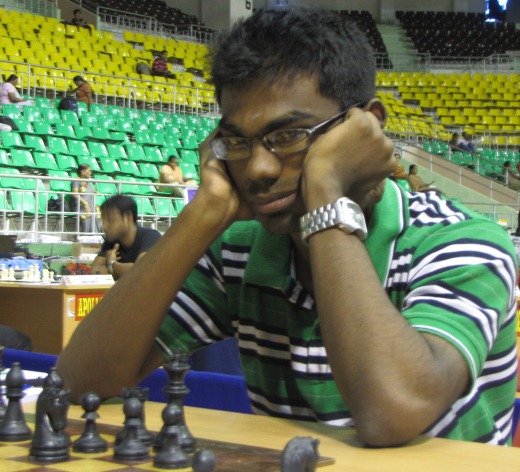 The smile shows as Sethu and Deepan drew their game in 15 moves out of the Ruy Lopez Berlin and Sethuraman to win the National Championship, just in his 3rd attempt. Sethu remained undefeated in his score card of 8.5 points with 5 wins and 7 draws.

From a scotch opening Deep Sengupta and VAV Rajesh of Tamil Nadu were following a game between Anish Giri and David Navara. Anish won the game with 17.Qb5, but Deep varied with 17.Nd5. Unperturbed by the changes Rajesh rallied his knights to defensive post disallowing further attack for the white pieces and the game ended in a draw in 25 moves. 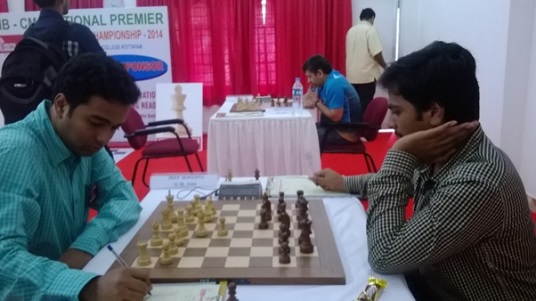 Catalan was the topic between these two ICF players. White was not interested in reclaiming the sacrificed c4 pawn, allowing black to have a stronghold on the queen side. Laxman unable to revive the position, tried a few tactics which was well averted by Karthik. Laxman resigned on the 41st move, facing the deficit of 2 pawns and no compensation to play for.

From the white side of Rossolimo Sicilian, Girinath played a modest 11.d3 against the highest rated player of the tournament Vidit Santosh Gujrathi of PSPB, instead of the active pawn push in the centre. Interestingly in the middle game both Kings were shielded by pieces and without pawns. Vidit erred with 31…Kh8, which was well used by Girinath who pointed his major pieces successfully towards black king. Vidit threw in the towel on 35th move owing to the irresistible attack by white. Girinath caused a great upset by beating the top seed of the championship. 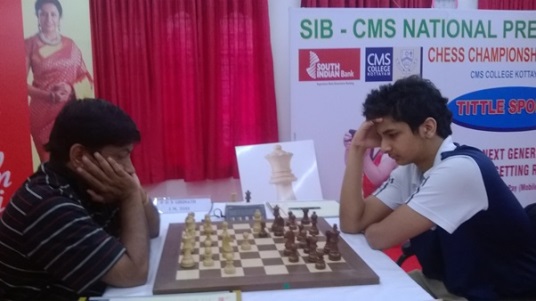 Lalith’s outpost on d5 square did not materialise against Kunte’s Bogo Indian defense. Even the passed centre pawns was unable to create inroads, despite piling of major pieces on the King file by White. The experienced Kunte played the endgame phase innovatively and won the game in 49 moves. 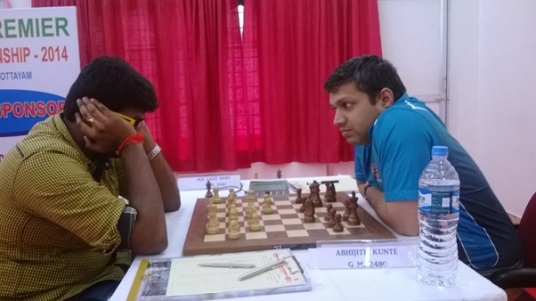 IM Swayams Mishra of Orissa chose the Rubinstein variation against the Nimzo Indian setup. On the 10th move, his opponent Shyam played out a new move to exchange one of the white’s bishops. Despite Swayams having a good control over the Queen file with array of his major pieces, Shyam’s timely counterattack on white’s king had to be dealt with. Immediately after the defense, both signed a truce in 26 moves. 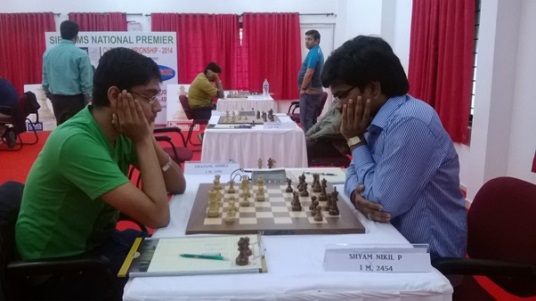