Former under 12 world champion Deep Sengupta emerged sole leader with 4.5 points, at the end of the sixth round of the SIB-CMS National Premier Chess Championship, organised by Kottayam Chess Academy.

He defeated IM Swayams Mishra of Orissa, whereas joint leader MR Lalith Babu was grounded by Delhi’s Sahaj Grover and the other co leader SP Sethuraman had a rest day. 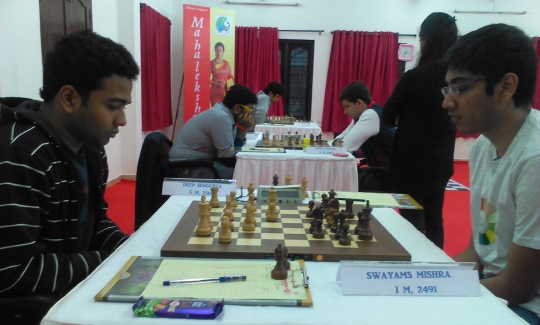 GM Deepan Chakkaravarthy of Railways is trailing by half a point. The thirteen player round robin tournament has an average of 2487, a category 10 event.

Deep was slow and steady in developing his pieces against IM Swayams Mishra of Odisha in Slav defence game. After gaining an exchange Deep’s march past of the a- pawn towards eighth rank prompted Swayms to resign the game.

Young Delhi grandmaster Sahaj Grover was in his elements, when he over powered GM Lalith Babu of PSPB in a Queens Indian defence game. Playing White, Lalith broke open his opponent’s king side, preventing Sahaj from castling. Sahaj retaliated by sacrificing a bishop to tear open Lalith’s king side. Lalith resigned on 34th move, realising the danger of getting checkmated. 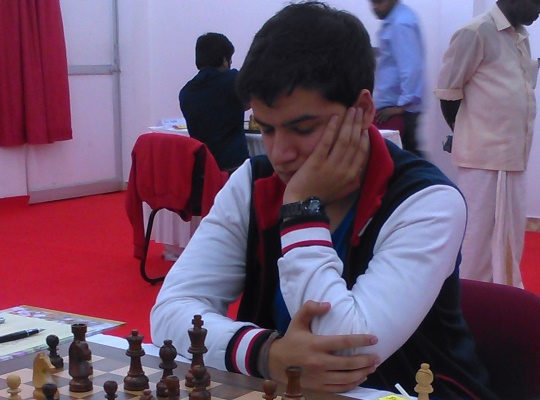 Sahaj Grover had a good win over GM Lalith Babu

In a Kings Indian defence, Deepan sacrificed his bishop to obtain a better position on the king side, leading to a chain if three connected pawns at the centre, against VAV Rajesh of TN. Rajesh had to forego his queen for a rook. Rajesh fought valiantly in a rook and pawns vs queen ending, but in vain. Deepan triumphed after 79 moves.

Twice national champion GM Abhijit Kunte of PSPB made short work of Railways’ international master P. Karthikeyan in just 20 moves of a Kings Indian defence, played by the latter. Karthikeyan’s pseudo sacrifice of his bishop did not work out and he resigned, when he was about to lose the exchange as well as a pawn.

Former under 14 world champion Vidit Santosh Gujrathi had to be content with a draw against Tamil Nadu IM P. Shyam Nikil in a Grunfeld defence in 35 moves. Railways team mates grandmaster RR Laxman and IM PDS GIrinath agreed for a quick and formal draw in 15 moves, after repeating their positions in a Ruy Lopez game.