Former Under 16 world chess champion SP Sethuraman of PSPB bounced back from his second round loss to score a crucial win over Deep Sengupta also of PSPB, third highest ranked player of the tournament in the third round of the ONGC 53rd National Premier Chess Championship, organised by Tiruvarur District Chess Association at Kasi’s Inn, Tiruvarur today.

Both overnight leaders Vidit Santosh Gujrathi of PSPB and P. Karthikeyan of Railways drew their respective games with Shyaamnikhil of Tamil Nadu and Neelotpal Das of PSPB to continue to share the lead with 2.5 points each.

Sethuraman adopted the O’Kelly variation of Sicilian defence against Deep and the game later transposed to Alapin. Actually, when Sethu played 24th Bb5 move, Deep had a superior position than his opponent. Two more moves later, he missed another chance to go for a big win, when Sethu played Be2. By exchanging the light coloured bishops, Deep threw the point to Sethuraman and adding to the woes, he also lost the dark coloured bishop in the process. Relieved Sethu played a cool game to pick up a valuable point from a formidable opponent. 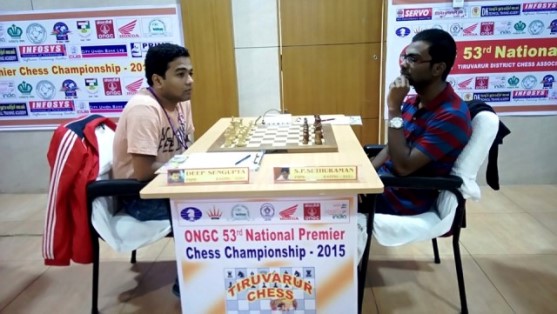 Though new to the format of round robin tournament, debutant to National Premier Chess Championship, K Praneeth Surya of Telangana displayed his prowess to outwit GM elect Swapnil Dhopade of Railways. In the battle between the winner and runner up of the National Challengers Championship, Praneeth, the runner up rose up to the occasion under time pressure to expose the opponent’s unguarded king. He first sacrificed his knight on 35th move and went further to sacrifice his rook for a bishop to finish the game in style.

Former under 16 world champion Karthikeyan Murali and grandmaster MR Venkatesh of PSPB played the Steinitz defence deferred variation of Ruy Lopez opening. In a queen, rook and pawns ending, Karthikeyan deflected his opponent’s rook away from guarding his king by sacrificing a pawn. Venkatesh fell into the trap and lost a valuable point and is yet to score in the tournament.

In the French advanced set up of Sicilian defence, both Rathnakaran and Abhijit Kunte fianchettoed their bishops on the king side. The latter enjoyed a slight advantage in the middle game after an exchange of queens on 20th move. Rathnakaran lost the exchange to remove the active bishop and Kunte converted the advantage to an easy win in 47 moves. 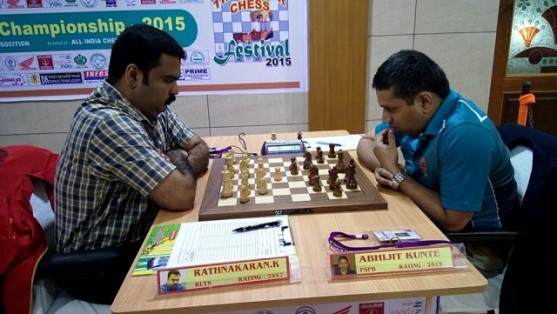 In the Sveshnikov variation of Sicilian defence, former under 14 world champion Vidit Santosh Gujrathi traded the queens with IM P. Shyaamnikhil of Tamil Nadu on 23rd move. Posting the two rooks on seventh rank, he tried to carve out a win using his outside passer pawn. But, Shyaam did not relent; went for counter attack, forcing repetition of position and extricated half a point from Vidit.

Neelotpal Das of PSPB and P. Karthikeyan had a peaceful draw in a game arising from Evans gambit accepted in 25 moves.

Grandmaster M. Shyam Sundar of AAI played the symmetrical queen pawn opening against Arghyadip Das of Railways. Das tried to repeat the position for a draw, but Shyam disallowed it. Anyhow, the longest game of the tournament until the third round ended in a tame draw.