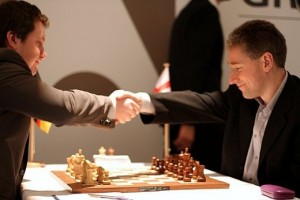 Arkadij Naiditsch was the only winner in the second round of the German super-tournament Grenke Baden-Baden 2013. He defeated Michael Adams in a 7-hour fight.

The round began with the two favorites, World Champion Vishy Anand and the only winner of the first round Fabiano Caruana, almost blitzing their first 30 moves in an opening where both were well prepared. The final position demonstrates clearly that the game was always destined to be a draw: perfectly symmetrical pawn structures with opposite-colored bishops.

The other quick result of the round was the draw between Meier and Fridman. The lower-seeded players of the tournament exchanged the minor pieces rather quickly and finished the game peacefully after a threefold repetition in 26 moves.

While these two games finished relatively fast, the battle between Mickey Adams and Arkadij Naiditsch was just beginning. The German, who recently won the B group in Tata Steel, ended up winning the struggle after 7 hours (!) of play. 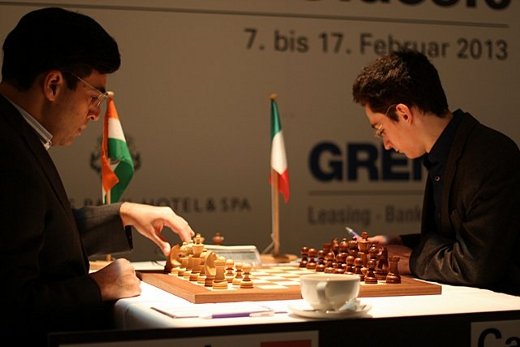 The game started with a Nimzo-Indian defence where a lot of exchanges took place at the start. However, the resulting position suited both players and they continued to search for ways to obtain an advantage. Adams’ passed pawns on the queenside seemed very dangerous in the long-run, but Naiditsch’s active pieces on the kingside kept black’s defenses busy. A combination of time trouble and the unprotected situation of Adam’s king, which was always threatened by white’s active queen, turned out to be the defining factor in the end. England’s Nr.1 resigned on move 79. A titanic battle! 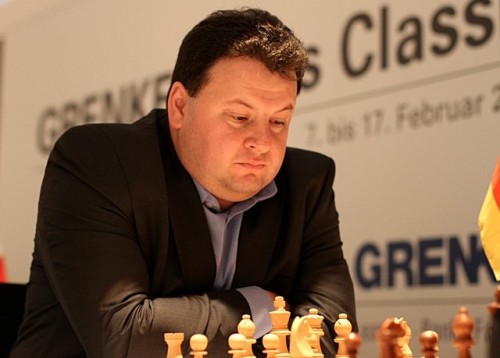