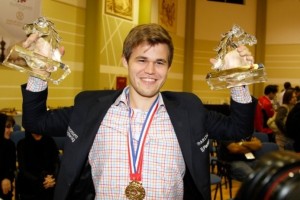 The 2015 World Rapid and Blitz Chess Championships are scheduled to take place from October 9-15, at the Bolle Meierei, in Berlin, Germany.

200 of the world’s best chess players will compete for the prize fund of $400,000. They include a record 161 Grandmasters, making it the highest-ranked FIDE rapid and blitz tournament in history.

“A record number of GMs coming to Berlin this week is yet another milestone in solidifying the strong chess foundation,” commented Kirsan Ilyumzhinov, president of FIDE. “The Rapid and Blitz Chess Championships are an annual event, gathering the world’s best fast-chess players, including reigning and past Rapid and Blitz World Champions. We’re pleased that FIDE and Agon are delivering the highest number of countries’ representatives to an official FIDE event.”

Among the players who will be competing are Magnus Carlsen of Norway, the reigning blitz and rapid champion, as well as former champions Viswanathan Anand (India), Alexander Grischuk (Russia), Vassily Ivanchuk (Ukraine), Leinier Domínguez (Cuba), Levon Aronian (Armenia), Sergey Karjakin (Russia) and Shakhriyar Mamedyarov (Azerbaijan). In total, players from 50 countries are competing, breaking the previous record that was set in Dubai in 2014.

“We’ve chosen Berlin as the host city for the Championship, due to its modern vibe and rich history, which is what we believe chess are all about,” said Ilya Merenzon, president of Agon Limited. “Chess has evolved with the time, and now people from all over the world will be able to watch the games, which will be broadcast online at the tournament website. Moreover, chess lovers will be able to stroll around the venue and watch their favorite players battle it out on the chessboard.”

There will be a grand gala on October 9, opening the championships, at the prestigious Kino International movie cinema. The gala will include a screening of the latest chess Hollywood blockbuster, “Pawn Sacrifice” starring Tobey Maguire and Liev Schreiber. This movie describes the story of the 1972 World Chess Championship match between Bobby Fischer (Maguire) and Boris Spassky (Schreiber). During the gala, Mr. Spassky, 78, will appear on stage of the cinema hall and greet the audience.