The fancied bets asserted their supremacy to prevent any major upset during the opening round of the 3rd Arab Elite Chess Championship – Kirsan Ilyumzhinov Cup, the most prestigious individual chess tournament in the region, Wednesday night at the Sheikh Saeed Bin Hamdan Al Maktoum Hall of the Dubai Chess & Culture Club.

Top-seed Grandmaster (GM) Bassem Amin dismantled ninth-seed Moroccan International Master (IM) Abdelaziz Onkoud’s Pirc Defence in 38 moves. Onkoud’s tentative opening play allowed Amin to launch a deadly attack with a pawn thrust to f5 on the 11th move and the Moroccan was forced to forfeit his right to castle five moves later.  Onkoud gave up his rook for white’s active dark bishop on move 22 to ease the pressure and gain counter-attacking chances, but the top-seed from Egypt had everything under control, forcing a series of exchanges to neutralize black’s initiative and wrap up the point.

The second board featured an early meeting between host players GM Salem AR Saleh and Fide Master (FM) Saeed Ishaq. The second-seeded Saleh played the Grunfeld Defence and came out victorious in a see-saw battled that lasted 65 moves. The 10th-seed Ishaq emerged a pawn up from the opening, but Saleh took advantage of white’s uncastled king to launch an attack in the middle of the board and wrest the initiative. The second-seed, however, floundered in the endgame and by the 52nd move Ishaq had excellent chances to hold the draw with an exchange sacrifice. Ishaq missed his last chance for survival and Saleh quickly pounced on the opportunity to secure the win. 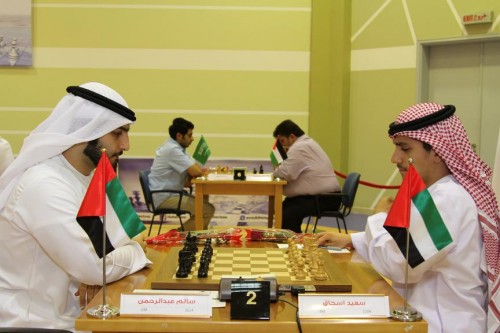 Yemen’s sixth-seeded IM Basheer Al Qudaimi, who is one of the coaches at the Dubai Chess and Culture Club, also marched into the win column after disposing of Oman’s Ali Shamas Salim Issa in 36 moves. The Omani misplayed the Alekhine Defence and had to give up a piece on the 14th move, giving Al Qudaimi the easy victory.

Libya’s FM Ali A. Elmejbri, the tournament’s lowest-rated participant, created a stir when he defeated eighth-seed FM Ahmed Abdulsattar Abdulwahhab of Iraq in 35 moves following an exciting attacking game that saw Elmejbri sacrifice a bishop on the 27th move to open attacking lines for his rooks and queen on the kingside. Abdulwahhab, who outrated the Lebanese player by more than 500 rating points, failed to find the best defence and eventually had to give up his queen in a hopeless situation.

Also posting victories in the first round were Jordan’s IM Sami Khader, who defeated Saudi Arabia’s Hamoud Al Nhier in 25 moves of a Nimzowitsch-Larsen opening, and FM Amir Zaibi of Tunisia, who beat Abdelkadei Sharabaty of Palestine in 29 moves of a Bishop’s Opening.

Tournament Director Mohammed El Husseini, welcomed the participants and guests and relayed a message from International Chess Federation (Fide) President Kirsan Ilyumzhinov, who a major supporter of the event. El Husseini said the tournament will help promote chess in the region as he thanked all the 15 countries that supported the championship by sending their best players.

Khaled Al Midfa, Ibrahim Al Bannai and Ahmed Khalifa Al Thani made the ceremonial first move on the first board to mark the opening of the tournament. 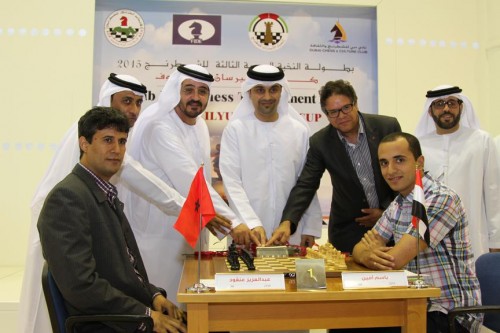 Ibrahim AL Bannai announces the start of Round 1