The games of the first round of the 46th finals of the All-Russian Chess Tournament White Rook will be played in Dagomys today.

For the first time since its inception, the finals have acquired international status. Aside from 328 young chess players from 75 Russian regions, foreign teams representing Israel, Belarus, Kyrgyzstan, Moldova, Mongolia and Armenia are taking part in White Rook 2015.

An exhibition “Chess during the War” has been organised by the RCF Chess Museum as part of the tournament. 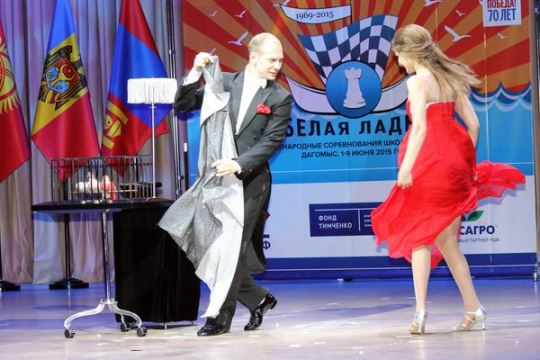 Founded in 1969, the All-Russian Chess Tournament for Teams of Educational Institutions White Rook is attracting growing numbers of participants. In 2015, more than 5,500 pupils younger than 14 were involved in the qualifying rounds in all Russian regions.

The strongest teams of the participating regions will play in the finals for the title of the best school chess team. The winning team will go to China in the autumn of 2015 to play against the best Chinese school team, owing to support from the Elena and Gennady Timchenko Charitable Foundation. 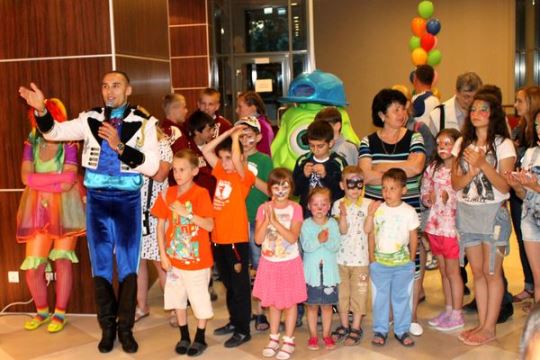 The opening ceremony was held last night at the film and concert hall of the Dagomys leisure centre. Welcome speeches were given by President of the Russian Chess Federation Andrey Filatov, President of FIDE Kirsan Ilyumzhinov and Deputy General Director of the Elena and Gennady Timchenko Charitable Foundation Igor Baradachev. The entertainment for children featured a performance by the magician Artem Shchukin, who also helped the chief referee to draw the lots.

Head of the Russian Chess Federation Andrey Filatov said that the tournament had an important educational mission besides the sports component. “The tournament celebrates the 70th anniversary of the Victory, and we have organised the exhibition ‘Chess during the War’ using the exhibits from our Chess Museum”, he said. “We have brought with us the exhibits we wish to show to children. This is the first time we have combined an exhibition with a tournament for children. I would also like to emphasise that, because the tournament is now an international event, these exhibits will be seen not only by Russian children but also by our foreign guests.” 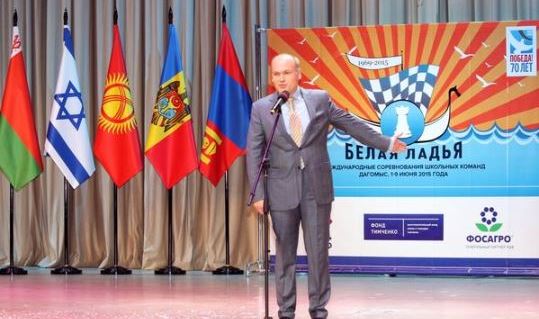 Kirsan Ilyumzhinov spoke about the importance of the international status for the school teams tournament White Rook: “The tournament has achieved international status. I participated in White Rook when I was a student and I was the captain of team Kalmykia and played in Ryazan, Togliatti, but that happened back in the 1970s. White Rook helped me not only become a chess player, but also a chess organiser, and Russian Chess Federation President Andrey Filatov played many White Rook games as well. White Rook has deep-rooted traditions. It is a good thing that the tournament has not decayed but keeps developing and has become a truly international event.”

According to Ilyumzhinov, the Sports for Children programme developed by the Russian Olympic Committee is being actively introduced across the board. “As part of the programme, pupils of 500 Russian schools will receive chess sets, equipment and books. It is great that the Olympic Committee contributes to promoting children’s chess”, Ilyumzhinov noted. 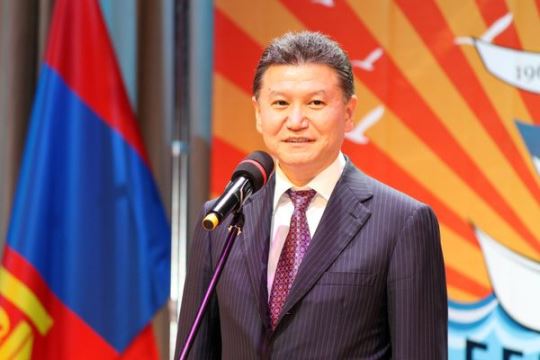 “White Rook facilitates involvement of children in intellectual competitions”, said Deputy General Director of the Timchenko Foundation Igor Baradachev. “Chess is one of the most accessible sports. People from various social groups play chess. Owing to the mass nature of the game, all Russian children have a chance to not only see other Russian regions, but also communicate with their peers and make new friends, which is also very important.”

In 2014–2015, pupils from other countries joined White Rook. The foreign teams participating in the finals were those that won the national tournaments in their respective countries.

Agreements making it possible for Moldova, Turkmenistan, Belarus and Israel to join White Rook were signed in August 2014 in Norway, on the sidelines of the Tromsø 2014 Chess Olympiad. The document on accession by Armenia was signed in Moscow last November, during the international Tashir chess tournament in memory of Tigran Petrosian. 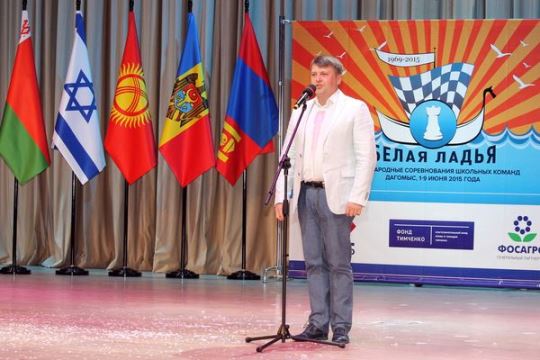 For the first time in the history of the tournament, pupils from orphanages have been involved in White Rook this year, including the Atazhukino cadet boarding school (Kabardino-Balkarian Republic) and the team of the Nekrasovskaya boarding school (Oryol Region), who won the tournament Northern Crown 2015. The involvement of these two teams became possible owing to the new programme by the Russian Chess Federation, which aims to promote chess for children left without parental support.

During the 2014–2015 school year, more than 200 boarding schools in 20 Russian constituent entities became participants in the programme and chess groups led by experienced teachers and coaches already operate in 50 boarding schools. The Federation plans to continue supplying chess equipment and hold municipal, regional and All-Russia competitions for children from orphanages as part of the chess-promotion programme.

The White Rook final games will be played through 9 June. The participants will play nine rounds of the Swiss-system tournament. 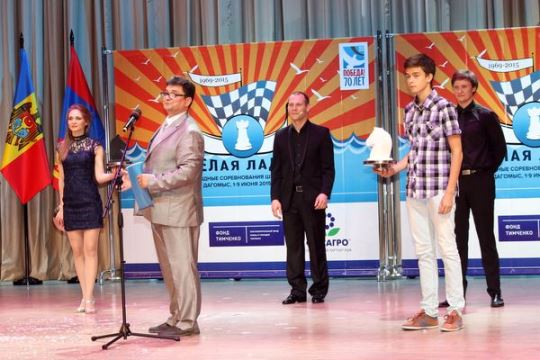 The participants in the finals will not only play tournament rounds and simultaneous displays with leading Russian grandmasters, but also enjoy a comprehensive cultural programme.

Brain Ring world champion Andrey Shumakov will be hosting intellectual games, including What? Where? When?, Assorti, and Brain Ring. 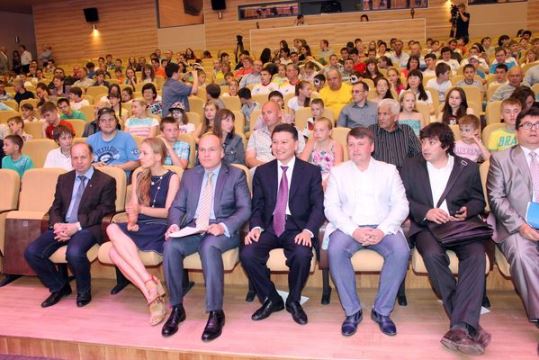 Information for the media

White Rook is an annual All-Russia chess tournament for teams of educational institutions. It was founded in 1969 and is organised by the Russian Chess Federation and the Ministry of Sport of the Russian Federation under the auspices of the Ministry of Education and Science. The tournament is held with the support of the Elena and Gennady Timchenko Charitable Foundation. Eligible for participation are pupils younger than 14. The tournament is held in several rounds; the best teams from the participating regions play the final games. Prior to 1991, White Rook, along with Leather Ball and Golden Puck, was tremendously popular, and millions of Soviet schoolchildren played qualifying rounds. After the disintegration of the Soviet Union, the tournament took a pause lasting longer than a decade. White Rook was revived in 2004. The mission of the tournament is to popularise chess among pupils, find talented young players and develop the creative and intellectual capacity of young people. In 2014, more than 5,000 pupils played the qualifying rounds of the 45th jubilee tournament. Three hundred young participants from 72 Russian regions played the final games.

Russian Chess Federation (RCF) is a public non-profit organisation that brings together individuals and chess federations of republics, regions, federal cities, autonomous regions and districts of the Russian Federation. The mission of the Russian Chess Federation is to promote and popularise chess in the Russian Federation. The RCF was founded on 15 February 1992. The RCF organises the annual All-Russian children’s chess tournament White Rook, the Championship of Russia and other chess tournaments. In 2012, the RCF launched the “Chess in Museums” programme.