Carlsen and Aronian simplified quickly to a draw in today’s eighth round of the Candidates Tournament. After drawing all his previous games, Vladimir Kramnik grabbed his first full point. With this win, the ex-world champion closes the gap with the leaders and has a chance to catch Carlsen in their direct encounter tomorrow.

The most expected game of the tournament finished rather quickly at the IET in London. The encounter between the two leaders left the top of the standings unchanged.

Magnus Carlsen, who had the advantage of the white pieces, opened with 1.c4. The variation chosen led the position to one of the main lines of the Catalan. White traded the important light-squared bishop and developed his pieces logically and calmly. Black defended his weaknesses effectively, not leaving any holes for the opponent to penetrate.

The focus of the position turned to the c5-square, as both players tried to control this point with their pieces. On move 20, Levon Aronian advanced his pawn to this important square in what IM Aman Hambleton called a “draw offer in disguise”. A massive process of simplification followed and the players agreed to a draw on move 41. 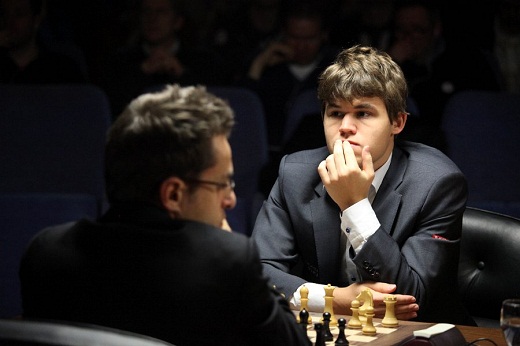 Peter Svidler used his favorite Gruenfeld Defense once again, after having tried other systems on previous rounds. It seems like he was looking for a draw, as he went directly into an endgame. Kramnik, who is well-known for his abilities in the technical phase of the game, gladly accepted the offer. He advanced rapidly with his pawns in order to put pressure on his opponent.

Svidler’s passive strategy backfired as he needed to find very precise moves to maintain the balance. This also affected his time management – Kramnik was almost an hour up on the clock by move 30. The ex-world champion kept moving his central and kingside pawns forward and black’s cramped position started to crumble. When white’s passed pawn arrived to d7, it was clear that there was no way out for black. Svidler resigned on move 40. 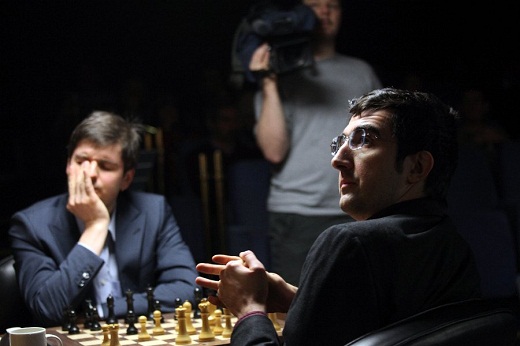 World Champion Challenger Boris Gelfand obtained his first win in the Candidates Tournament. He defeated Teimour Radjabov with the black pieces. The Israeli now has 3.5 points, two points behind the leaders.

Gelfand answered to Radjabov’s Reti with a solid setup, giving up the bishop pair on the 11th move. His piece play was very precise and allowed him to achieve a strategic advantage. Radjabov tried to compensate for this with active play on both flanks, but by doing so created weaknesses in his own camp.

The Israeli created some very uncomfortable threats using the fact that the white king did not have a very safe position. Radjabov’s desperate attempts to create counterplay only quickened the decisive result; he decided to resign his chances on move 32, being two pawns down in a hopeless position. 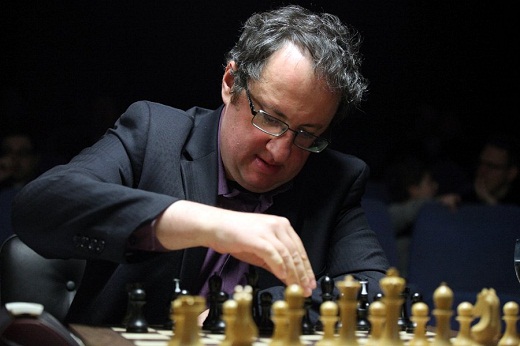 Vassily Ivanchuk suffered his third loss on time of the tournament against Alexander Grischuk. Both players are known for their dubious handling of the time factor, but this time Grischuk proved to have better nerves in these situations. When Ivanchuk’s flag fell on move 39, the Russian only had 2 minutes left.

The game was a Four Knights Variation of the Sicilian Defense. Grischuk, playing white, castled kingside and created a positional struggle. After the queens were traded, the Russian gained the initiative and started putting pressure on Ivanchuk’s position. When the Ukrainian’s time ran out, the evaluation was slightly favorable for white. 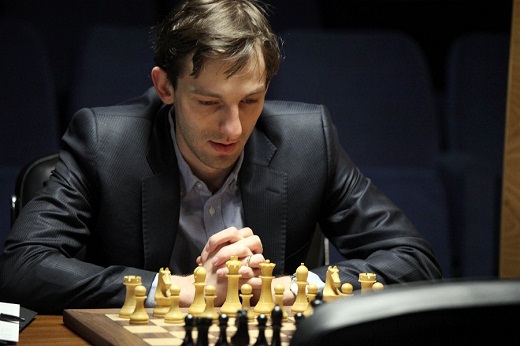 Tomorrow’s stellar game will be Carlsen – Kramnik. The rest of the games are Svidler – Grischuk, Ivanchuk – Radjabov and  Gelfand – Aronian.