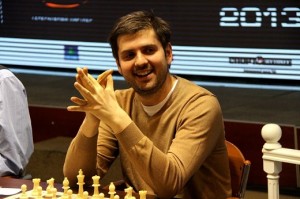 Ian Nepomniachtchi kept his good form during the Aeroflot blitz and still leads the tournament one round before the end. He defeated Alexander Grischuk with a perfect 2-0 and gained an important lead in the standings. He quickly signed two draws with Karjakin in the next rounds, to have 14,5/16.

The only player that might put him down is his last round rival, Peter Svidler. The experienced Russian had some early setbacks, as he lost two games against much lower rated opponents – WIM Alina Kashlinskaya and GM Mustafa Yilmaz. However, he recovered by winning all but one of his games, defeating very strong players such as Alexander Riazantsev, Denis Khismatulin, and Dmitry Andreikin. He is now in sole second place a point behind Nepomniachtchi.

Super-GM Sergey Karjakin and GM Ernesto Inarkiev are sharing the 3rd-4th places with 12,5 /16,0. They no longer have a chance to get the first place.